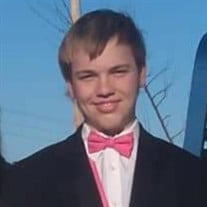 PIERCE -- Funeral service for Alexander L. Clausen, 18, of Pierce will be held at 10:30 a.m., Monday, February 7, 2022 at Northern Heights Baptist Church, Norfolk. Pastor Matthew Gilmore will be officiating the service. Burial will take place at Prospect View Cemetery, rural Pierce. Visitation will be held 4:00 - 7:00 p.m., Sunday, also at Northern Heights Baptist Church, Norfolk. Alexander passed away on Saturday, January 29, 2022 at his residence in Pierce as a result of a house fire. In lieu of flowers, memorials/donations may be made to the family at the Midwest Bank or Elkhorn Valley Bank in Pierce. Stonacek Memorial Chapel is in charge of the arrangements. The service will be live streamed on the Stonacek Funeral Chapel Facebook page. Alexander L. Clausen was born on Sept. 18, 2004, in Norfolk to Leroy and Theresa (Ahlmann) Clausen. Alex attended grade school at Pierce Elementary, completed his Pierce High School senior year early in December 2021. Alex worked at Subway in Pierce during the summer and after school during his senior year. He had recently started working for Pierce Auto as a mechanic with plans to start school at WyoTech this coming school year. Alex enjoyed hunting, camping, tinkering with electronics and anything mechanical, as well as creating art designs. Alex was a member of Northern Heights Baptist Church in Norfolk. Survivors include his parents, Leroy and Theresa Clausen of Pierce; a sister, Lillian Clausen of Pierce; his grandparents, Patricia Wagner of Belden and Charlene Clausen of Stanton; girlfriend Brooke Reddest of Pierce; and many aunts, uncles, cousins and friends. Alex was preceded in death by grandfathers Kenneth Clausen and Leslie Ahlmann. Condolences may be expressed to the family online at www.stonacekfuneralchapel.com.

The family of Alexander L. "Alex" Clausen created this Life Tributes page to make it easy to share your memories.

Send flowers to the Clausen family.