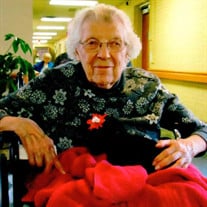 NORFOLK -- Funeral service for Alice R. Cerny, 94, of Norfolk will be held at 11:00 a.m., Friday, March 13, 2020 at the Stonacek Funeral Chapel in Norfolk with Rev. Randy Rasmussen officiating. Graveside service will be held at 1:30 p.m., Friday, at the Clarkson National Cemetery. Visitation will begin at 10:00 a.m., Friday prior to the service. Alice died Thursday, March 5, 2020 at the Faith Regional Hospital in Norfolk. Stonacek Funeral Chapel in Norfolk is in charge of the arrangements. Alice was born on January 8, 1926 in rural Stanton County to Josef F. and Marie (Srb) Cerny. She attended Stanton County rural School District #24. She took care of her father and helped him on the farm until his passing in November, 1966. She then moved in with her sister and husband, Mary and William Hladik and helped with housework and the farm work. She moved to Norfolk in 1986 with her sister and brother in law. Alice and Mary worked for many different people in Norfolk, cleaning houses and businesses. After retirement and in her later years, she helped to care for her sister, Mary. Alice was a resident of the Homestead Assisted Living Facility and moved into the St. Joseph’s Care and Rehab Center in the spring of 2016. Alice enjoyed craft work and crocheting and made some beautiful afghan blankets which were given to various members of her family. She enjoyed all the craft, entertainment, animal visits, and activities at St. Joseph’s. Alice enjoyed being interviewed by the student nurses for the care plans they had to do for their nursing studies and was always willing to participate in this part of the student nurses’ program. Alice was a 50 + year member of ZCBJ (Zapadni Svornost) Lodge # 28 of Clarkson, Nebraska. Alice is survived by nieces Dianne (Gerald) Bahn of Yankton, SD, Libbie Ann Bukoski of Omaha, Caroline Kiehn of Lavista, Mary Jane (Jerry) Sestak of Lavista, Margaret (Doug) Singleton of Tylertown, Mississippi, and great nieces Robyn (David) Graiver of Portland, Oregon, and Lisa (William) Taylor of Puyallup, WA. She was preceded in death by her parents, her sisters Libbie (Joseph) Kripal, and Mary (William) Hladik. Condolences may be expressed to the family on-line at www.stonacekfuneralchapel.com.

The family of Alice R. Cerny created this Life Tributes page to make it easy to share your memories.

Send flowers to the Cerny family.