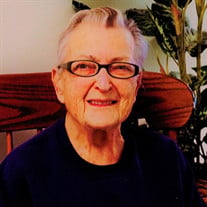 OSMOND -- Funeral service for Arlean E. Pfanstiel, 91, of Osmond will be 11:00 a.m., Thursday, March 3, 2022 at Immanuel Lutheran Church, in Osmond. Officiating the service will be Reverend Scott Kirchoff. Interment will be at Immanuel Lutheran Cemetery rural Osmond. Visitation will be from 9:00 a.m., Thursday to service time at Immanuel Lutheran Church in Osmond. Arlean passed away on Saturday, February 12, 2022 in Osmond. Stonacek Memorial Chapel in Osmond is in charge of the arrangements. Born Feb. 13, 1930, in Foster, Arlean Pfanstiel was the daughter of Benjamin and Bertha (Krueger) Krueger. She was baptized and confirmed in the Lutheran church and grew up in Foster until she was 10. She attended schools in Foster and Pierce and went to the 10th grade at Norfolk High School. She married Herman Klug on June 9, 1945, at Norfolk. He died Oct. 30, 1955. On April 23, 1964, she married Harry Lenser at Yankton. They farmed at Norfolk until moving to McLean. There they owned and operated a restaurant called Harry’s Place for 28 years. Arlean moved to Plainview. Harry died Jan. 28, 2004. She moved out to McCook in May 2005. Arlean moved back to the Pierce County area. Arlean married Delmar Pfanstiel on June 12, 2009, in Osmond. They lived on the Pfanstiel family farm until Delmar died June 24, 2019. She was a member of Immanuel Lutheran Church in Osmond. Survivors include her children, Leon (Lydia) Irvin of Fort Collins, Colo., Dennis (Patricia Read) of Oconto, Sheryl Williams of Omaha, Lee William (Bonnie) Oliva of St. Joseph, Mo., Jacalyn Hanlon of Lakeside, Ark., and Dina (Terry) Schwartz of Lincoln; stepchildren LaJean Hofmann of Norfolk; Bernita (Doug) Bauer of Worland, Wyo., Randy (Janet) Pfanstiel of McLean, Diane (Dan) Short of Powell, Wyo., Kevin Pfanstiel (Sherry Albrecht) of Pierce, Gene (Julie) Pfanstiel of Randolph; many grandchildren, great-grandchildren, nieces and nephews; and two sisters, Bernice Siems of Elgin and Inez (Omar) Brisendine of Jefferson, Mo. She was preceded in death by her parents, Benjamin and Bertha; brothers Lawrence, Clarence, Albert and Emil; sisters Rose Berg, Alvina in infancy and Betty Pino; and her spouses, Herman Klug, Harry Lenser and Delmar Pfanstiel. Condolences may be expressed to the family online at www.stonacekfuneralchapel.com.

OSMOND -- Funeral service for Arlean E. Pfanstiel, 91, of Osmond will be 11:00 a.m., Thursday, March 3, 2022 at Immanuel Lutheran Church, in Osmond. Officiating the service will be Reverend Scott Kirchoff. Interment will be at Immanuel Lutheran... View Obituary & Service Information

The family of Arlean E. Pfanstiel created this Life Tributes page to make it easy to share your memories.

Send flowers to the Pfanstiel family.