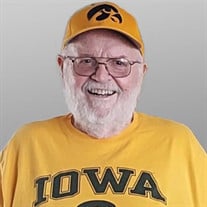 BATTLE CREEK -- Funeral service for Arthur R. "Dick" Erickson, 81, of Battle Creek, will be held at 11:00 a.m., Thursday, May 12, 2022 at the Stonacek Funeral Chapel in Norfolk. Pastor Kurt Kaiser will be officiating the service. Private family inurnment will be held at a later date. Visitation will be from 9:00 a.m. until service time also on Thursday at Stonacek Funeral Chapel. Dick passed away on Sunday, May 8, 2022 at the Faith Regional Hospital in Norfolk. The service will be live-streamed at https://www.stonacekfuneralchapel.com/obituaries/Arthur-Erickson-6/#!/PhotosVideos. Stonacek Funeral Chapel in Norfolk is in charge of the arrangements. Arthur Richard "Dick" Erickson, the son of Art and Faye (Carter) Erickson, was born April 6th, 1941 in St. Anthony Hospital in Carroll, IA and died May 8th, 2022 in Norfolk, NE at the age of 81 years, 1 month and 2 days. He was baptized on December 21, 1941 along his mother Faye at the Evangelical Lutheran Church in Audubon, IA. Dick attended schools in Audubon, Gray, and Viola Center. In 1957 Dick’s family bought a farm close to Exira. This is where he graduated high school in 1959. His class of 1959 was the last class to graduate from the old Exira school. During his high school, Dick was a member of the Exira football team that went undefeated the years he played. He suffered a knee injury which continued to give him issues throughout his life. After graduation, Dick went to Omaha to attend Universal Trade School where he graduated with a degree in Auto Mechanics. While at school, Dick met the love of his life, Carol Chambers while working at Immanual Hospital. In the spring of 1961, Dick proposed and they were married on October 7, 1961. While they resided in Exira, Iowa, son Richard and daughter Jeanie were born. After moving to Omaha, in the fall of 1963, they had a second daughter Lisa born 1966. In 1966, the family moved to Colorado where they lived until 1972. The family moved back to Omaha where they lived for 3 years before moving to Denison, IA. In 1979, a “happy accident” occurred when Tim was born. Dick was very active in Zion Lutheran Church. Being from Iowa and living in Colorado, Dick was a huge Iowa Hawkeyes and Denver Broncos fan. This was passed down to his children and grandchildren. His last 2 houses included a "Denver Broncos room". After retiring in 2003, Dick worked for Crawford County fair board. During retirement, Dick enjoyed wood working, cooking, spending time with his family and taking trips to Colorado. One of his favorite trips was to Washington D.C. and not genealogy trips to Missouri 😊. In 2019, Dick and Carol moved next door to their son, Rich and his wife Jodi in Battle Creek, NE, where Jeanie and Randy also reside. Survivors include his wife Carol and children: Rich and wife Jodi Erickson, Jeanie and husband Randy Wilken all of Battle Creek, Lisa Erickson of Norfolk, Tim and wife Sara Erickson of Grimes, IA. Grandchildren: Rich and Alice Erickson of Madison AL, Shawn and Paige Erickson of Battle Creek, Caleb Erickson of Norfolk, Austin Erickson of Omaha, Nikki and Jake Dingess of Omaha, Josh and Serena Hensley of Omaha, Shama and Dually Shelley of Dow City IA, Chad Chapek and Nicole Polt of Norfolk, Heather Dvorak of Norfolk, Jordan Wilken of Lincoln, Eli Erickson and Cara Erickson of Grimes, IA. He was “Big Papa” to 19 great grandchildren and 2 great-great grandchildren. He is also survived by his sisters Judy Crampton and Susie Riesgaard (Craig) and brothers Dale Erickson, Alan Erickson (Jerene) and Robert Erickson (Cindy). Longtime friends Greg Hawley (Pam) and Dean Garnett (Marilyn). Preceding him in death were his parents Faye and Art Erickson, mother-in-law and father-in-law Ed and Althea Chambers, brothers-in-law Mark Crampton, Tom McGee and David Chambers; and sister-in-law Rose Erickson. Organist will be Emily Carlson. Pallbearers will be Rich Erickson, Jake Dingess, Shawn Erickson, Josh Hensley, Caleb Erickson, Chad Chapek, Eli Erickson, and Austin Erickson. Condolences may be expressed to the family on-line at www.stonacekfuneralchapel.com.

BATTLE CREEK -- Funeral service for Arthur R. "Dick" Erickson, 81, of Battle Creek, will be held at 11:00 a.m., Thursday, May 12, 2022 at the Stonacek Funeral Chapel in Norfolk. Pastor Kurt Kaiser will be officiating the service. Private family... View Obituary & Service Information

The family of Arthur R. "Dick" Erickson created this Life Tributes page to make it easy to share your memories.

Send flowers to the Erickson family.