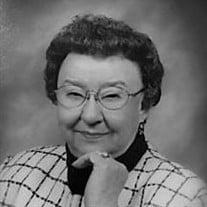 PIERCE — Services for Barbara Betty Sirek, 95, Plattsmouth, formerly of Pierce, are pending at Stonacek Memorial Chapel in Pierce. She died Sunday, Nov. 10, 2019, at Nebraska Masonic Home in Plattsmouth. Barbara Betty (Becker) Sirek, age 95 passed away peacefully on November 10, 2019 at the Nebraska Masonic Home in Plattsmouth, Nebraska. Barbara loved and was devoted to her family. Barbara Betty was born November 28, 1923 on a farm in rural Pierce County, Pierce, Nebraska (NE) to John and Anna (Kraning) Becker. She was the oldest of 4 children. Barbara Betty lived in Bazile Mills, NE (Knox County) on a farm called “Nansen Place”, where she started rural school. The family also lived in Niobrara, NE (Knox County), Enola, NE (Madison County) on the “Fur Farm” and Pierce County, where she attended another rural school through 8th grade. She graduated high school at age 17 from Meadow Grove, NE (Madison County) in 1941. After graduating from High School, she taught elementary students in rural schools at Plainview, NE and Norfolk, NE. Barbara Betty married Winferd Sirek on May 15, 1944 at her parent’s farm near Center, NE (during a flood!) After marriage, while Winferd was stationed at Camp Hood – U.S. Army, she taught school at Camp Hood Army Camp School in Killeen, TX. Upon discharge (1945), Barbara Betty and Winferd moved to rural Pierce, NE to farm. They moved into Pierce, NE in 1955 where she and Winferd owned the Pierce Dry Cleaners. Barbara Betty remained in the same home until 2010 when she moved to the Nebraska Masonic Home in Plattsmouth, NE where she remained until her death. During Barbara Betty’s years in Pierce, she was very involved with the Pierce, NE community: Congregational United Church of Christ, Eastern Star, PEO, American Legion Auxiliary, 4-H, Cub Scouts, and many various Pierce school events. She was an AVON Lady until age 87. Her passion was writing “Stories”….many were about her life journey, but also amusing stories about day-to-day living over the many decades of her experiences and world changes. Her most joyful memories were that of raising her family. Together she and Winferd had six children. In addition, grandchildren, great grandchildren and great-great grandchildren brought great happiness to her. Left to honor Barbara Betty and remember her love are her six children: Connie (Don) Grout, Urbandale, IA; Bernice (Robert) Kocanda, Omaha, NE; Susan (Atley) Wedemeyer, Omaha, NE; David (Beth) Sirek, Elkhorn, NE; Jean Sirek (Chet Hayes), Carson City, NV, and Ross (Janice) Sirek, St. Louis, MO; her many grandchildren, great grandchildren and great-great grandchildren. Her brother James Becker (Evelyn), Center, NE, many nieces and nephews and special friends Leon and Kaye Janovy and family (Pierce NE), Barb Lambries, (Plattsmouth, NE) and friends in Pierce, NE and the Nebraska Masonic Home (Plattsmouth, NE). Barbara Betty was preceded in death by her husband, Winferd G. Sirek, her parents, her sister and brother-in-law William and Darlene Teachman (Omaha, NE), and brother Gene Becker (Walthill, NE). The family would like to extend a special thank you to all of the staff at the Nebraska Masonic Home for giving so much loving care and support to our dear Mother. Barbara Betty’s Celebration of Life Services will be held in the Chapel at the Nebraska Masonic Home in Plattsmouth, NE on November 21, 2019 at 1:00 p.m. Officiate will be Pastor Chris Abbott. Additionally, the family will receive relatives and friends later on to be announced at the Stonacek Memorial Chapel in Pierce, NE. Private family committal will follow at the Prospect Cemetery in Pierce, NE. Memorial donations may be directed to the Nebraska Masonic Home in Plattsmouth, NE or the United Church of Christ in Pierce, NE. Online condolences may be expressed at www.stonacekfuneralchapel.com

The family of Barbara Betty Sirek created this Life Tributes page to make it easy to share your memories.

Send flowers to the Sirek family.