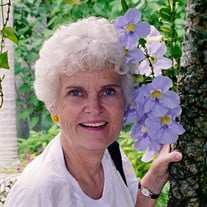 PIERCE -- Funeral service for Beata M. Schlickbernd, 90, formerly of Chadron, will be at 10:30 a.m. Monday, April 1, 2019 at St. Joseph's Catholic Church in Pierce with the Father Marc Lim officiating. Graveside service will be held at 10:00 a.m., Wednesday, April 3, 2019 at the Calvary Cemetery in Chadron. Visitation will be held 3:00 p.m. to 5:00 p.m., Sunday, March 31, also at St. Joseph's Catholic Church in Pierce, with the rosary service beginning at 5:00 p.m. also at the church. Beata died Tuesday, March 26, 2019 at the Countryside Home in Madison. Stonacek Memorial Chapel in Pierce is in charge of the arrangements. Beata was born January 7, 1929 to Henry and Margareth (Frickenstein) Krienert in Sioux City, Iowa and raised on a farm near Pierce, Nebraska with her five younger sisters. She attended St. Mary’s Catholic school in Osmond. After finishing school, Beata worked for neighboring families and met William Schlickbernd, the love of her life, at a dance, in 1947. They were married April 20, 1949 in Osmond. In 1953, they moved to Chadron with three children, and over the years, their family grew to include six daughters and six sons and lived in their big house on the corner of Chapin Street for over 40 years until Willie passed away in 2010. Beata moved to Madison, NE to live at Countryside Home in 2014. In Chadron, Beata was a member of the St. Patrick’s Catholic Church altar society, prayer chain, weekly prayer meeting, and the Charismatic Renewal movement. Outside of church, she was a founding member of an organic foods cooperative in the 1970s to bring affordable natural foods to Chadron. She was passionate about organic gardening, canning and making pickles, jams, and jellies. Most of all, Beata was legendary in Chadron for her homemade bread and rolls, and even taught an extension class at Chadron State College on bread baking. She was featured in a regional newspaper for her baking methods and recipes. She also enjoyed dancing, birdwatching, gardening, music, drawing, and was a voracious reader. She was fortunate to have the opportunity to travel internationally to Japan, Germany, Canada and throughout the country to visit her friends, relatives, children and grandchildren. Beata was a member of the Women's Aglow Ministry. Beata was preceded in death by her parents, her husband, William Schlickbernd, her son Stephen Schlickbernd, daughter-in-law Shelley Schlickbernd, son-in-law Brian Davenport, sisters Frances Hoffmann, Mary Dartman and Adela Zach. She is survived by daughters Elizabeth Davenport, Margaret (Al) Zipperlen, Joan Kutchmarski, Diane (David) Adams, Mary (Phil) Ryan and Angela (Dennis) Amith; and sons John Schlickbernd, David (Cecilia) Schlickbernd, Fred (Patty Wilson) Schlickbernd, Mark (Kathleen) Schlickbernd, Joseph Schlickbernd, Vincent (Shari) Schlickbernd, 22 grandchildren, 22 great-grandchildren, and 5 great-great grandchildren two sisters Hilde Zach of Pierce, Margaret (Tony) Lindhorst of Sauk Centre, MN, brothers-in-law Leonard Hoffmann of Pierce, and Ferd Zach of Humphrey. The family would like to extend special thanks to Countryside Home in Madison, whose nurses and staff provided care for Beata in her final years with such grace, dignity and love. Casket bearers will be her sons Fred Schlickbernd, John Schlickbernd, David Schlickbernd, Mark Schlickbernd, Joe Schlickbernd, and Vincent Schlickbernd. Honorary casket bearers will be her daughters Elizabeth Davenport, Margaret Zipperlen, Joan Schlickbernd, Diane Adams, Mary Ryan, and Angela Smith. In lieu of flowers, donations may be sent to the Alzheimer’s association of Nebraska. Condolences may be expressed to the family on-line at www.stonacekfuneralchapel.com.

PIERCE -- Funeral service for Beata M. Schlickbernd, 90, formerly of Chadron, will be at 10:30 a.m. Monday, April 1, 2019 at St. Joseph's Catholic Church in Pierce with the Father Marc Lim officiating. Graveside service will be held at 10:00... View Obituary & Service Information

The family of Beata M. Schlickbernd created this Life Tributes page to make it easy to share your memories.

Send flowers to the Schlickbernd family.