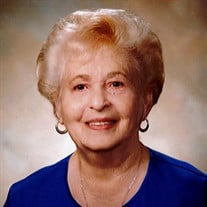 NORFOLK -- Funeral service for Betty June (Bickford) Ediger, 89, of Norfolk will be held at 10:30 a.m., Thursday, March 25, 2021 at the Stonacek Funeral Chapel in Norfolk with Pastor Brian Johnson and Pastor Dick Dungan officiating. Private burial will be held on Friday, March 26 at the Aurora Cemetery, Aurora, Nebraska. Visitation will be 4:00-7:00 p.m., Wednesday, also at the Stonacek Funeral Chapel. Masks are required for both the visitation and funeral service and social distancing will be enforced. Betty passed away on Monday, March 22, 2021 at the St. Joseph's Rehabilitation and Care Center in Norfolk. Stonacek Funeral Chapel in Norfolk is in charge of the arrangements. Betty June Bickford was born on June 9, 1931 on a farm near Aurora, Nebraska to Charlie and Lillian (Larsen) Bickford. She grew up on the farm and later in the home of her grandparents, Dorr and Nellie Bickford. She graduated from Aurora High School in 1948 and started teaching in a country school near Aurora at age 17. She continued to live with her grandmother in Aurora while teaching. On June 12, 1949, she married her lifelong husband, Cliff Ediger and started a life together that lasted 64 years. Initially they farmed a few miles north of Hampton and during that time she had three children, Mark Evan, Marlene Jennifer, and Janaree. She and her husband later moved to Aurora where they started a photography business with the name of Cliff’s Studio. At first, they operated this business out of their home. Later they moved it to the Aurora town square where it was in business for 34 years. After selling the property and retiring, Betty June moved with her husband to Norfolk, Nebraska where she studied and obtained her securities and insurance licenses and started a financial business named Advantage Financial which she successfully operated until 2015. In her lifetime, Betty June served as president of American Artists Guild, judge and president of the Professional Photographers of Nebraska (PP of A). She wrote a book called “Here’s How” for color artists and donated all proceeds to the Artists Association. After receiving numerous awards as a Certified Professional Photographer, and Photographer Craftsman, all national “PP of A” awards, she spoke nationally on Marketing and Motivation. In addition to her many professional achievements her first priorities were her family and church. She was the first president of Christian Women’s Club in Aurora and loved teaching youth groups at Sunday School. Her hobbies were riding Harley motorcycles with her husband Cliff, skiing, skating, hot air ballooning, taking a helicopter over Alaskan Glaciers, snorkeling in Mexico, and piloting a glider where she “flew with the eagles” in New Mexico. But the greatest thrills of her life were with the experiences of the Holy Spirit of the Living Christ. Life served up many lessons in faith and trust in Eternal Life. Her husband Cliff and both of her daughters, Jennifer and Janaree, preceded her in returning home to the Lord. She is survived by her son, Mark (Merrilee) Ediger of Smyrna Georgia, Grandchildren David (Michele) Ediger of Smyrna, Georgia, Myer (Arhia) Nore of Boston, Massachusetts, and Kathryn Nore of Lincoln, Nebraska. Also, great grandchildren Molly, Madelyn, and Leah Ediger, children of David and Michele. She is also survived by her sister Ella Mae Broderick of Phoenix as well as many nieces and nephews, neighbors and friends. Honorary casket bearers will be Barry Bickford, Blake Binder, Brady Binder, Brad Lowe, Todd Pinkelman, Tanner Lancaster, and Sonjia Putnam. Condolences may be expressed to the family on-line at www.stonacekfuneralchapel.com.

The family of Betty J. Ediger created this Life Tributes page to make it easy to share your memories.

Send flowers to the Ediger family.