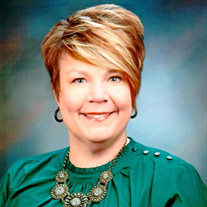 NORFOLK -- Funeral service for Bobbie S. Bell, 45, of Norfolk will be held at 10:30 a.m., Wednesday, July 15, 2020 at the Christ Lutheran Church in Norfolk with Rev. Adrian Hanft officiating the service. Burial will take place at Hillcrest Memorial Park Cemetery in Norfolk. The funeral and graveside services will be live streamed on the Stonacek Funeral Chapel Facebook page. Visitation will be held from 4:00 - 7:00 p.m., Tuesday, at Stonacek Funeral Chapel in Norfolk. Bobbie died Thursday, July 9, 2020 at her home in Norfolk surrounded by her family after a long courageous battle with breast cancer. Stonacek Funeral Chapel in Norfolk is in charge of the arrangements. Bobbie Sue Bell, the daughter of Robert and Beverly (Johnson) Starkel, was born September 17, 1974 in Norfolk. She was baptized and confirmed at Christ Lutheran Church in Norfolk and attended elementary school initially at District #20 School and then at Christ Lutheran School in Norfolk. She graduated from Norfolk Senior High School in 1992, attended Northeast Community College two years and then graduated from Sioux Valley Hospital School of Radiology in Sioux Falls, SD in 1996. Bobbie immediately went to work for Faith Regional Health Services in Radiology and later moved into the Cath Lab when the service was added to the hospital. It was there she met the love of her life Daniel Bell. Dan and Bobbie were married February 25, 2006, at the Christ Lutheran Church in Norfolk and to this union a daughter, Berklie, was born. Bobbie grew up on her parent’s dairy farm and learned a strong work ethic early on. She enjoyed being outside helping her dad with fetching his tools and finding out how things work. She was in 4-H with her horse and fed the baby calves in the mornings with her sister before going to grade school. She taught herself how to make delicious pies a the age of 11. She was talented in many ways and enjoyed her hobbies of knitting or crocheting beautiful creations, fishing, decorating, and painting her home, gardening, and cooking. She and Dan loved to prepare delicious meals for family and friends and they even did a lot of canning from their garden. They both played co-ed softball with friends as Bobbie learned to love the sport when she played it every summer from kindergarten through high school. She was a member of Christ Lutheran Church, served on the Board of Kings Kids Daycare, For the Girls, and the American Heart Association. In 2017 she was awarded the Laura Gross Award from Faith Regional Health Services for doing her job with the upmost kindness and caring. In addition to being devoted to her family, Bobbie enjoyed many wonderful friendships. Her friends were always important to her. She enjoyed taking vacations with her family and friends. Survivors include her spouse Daniel Bell, daughter Berklie Bell, step-son Derek Bell, parents Bob and Bev Starkel, sister Libby (Chris) Campbell, nephews Caleb, Cyler, and Cruz all of Brighton, CO, mother-in-law Sandra Bell of Fremont, brothers and sisters-in-law Merit (LuAnn) Bell, Cynthia Cusick, Allen (Jayne) Bell, Sherry Bell, Jeff (Melissa) Bell, Dave (Jill) Bell, and many nieces and nephews. She was preceded in death by her grandparents Elmer and LaVerne Starkel, Ralph and Lillian Johnson, and father-in-law Merit L. Bell Sr. of Lincoln. Casket bearers will be Merit Bell, Allen Bell, Jeff Bell, Dave Bell, Jerid Starkel, and Gerald Wachter. Condolences may be expressed to the family on-line at www.stonacekfuneralchapel.com.

The family of Bobbie S. Bell created this Life Tributes page to make it easy to share your memories.

Send flowers to the Bell family.