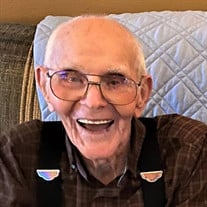 NORFOLK -- Memorial service for Bobby G. Mahnke, 90, of Norfolk formerly of Beemer, will be held at 11:00 a.m., Thursday, March 3, 2022 at Our Savior Lutheran Church in Norfolk. Pastor Eric Gradberg will be officiating. Visitation will begin 1 hour prior to the service also at the church. Inurnment with military honors will be held at a later date this Spring, at the Beemer Cemetery, Beemer, NE. Bobby passed away on Thursday, February 24, 2022 at the Faith Regional Hospital in Norfolk. Stonacek Funeral Chapel in Norfolk is in charge of the arrangements. Bobby was born on April 19, 1931 in Beemer, Nebraska to Albert and Irene (Beerbohm) Mahnke. Bobby attended grade school in Beemer and graduated from Beemer High School in 1949. After bobby’s education, he was drafted info the United States Army. He served from December 12, 1952 to October 21, 1954. After the service he moved back to Beemer and worked for Beemer Lumber Company as a carpenter for 30 years until he retired. Bobby married Donna Bryant on June 24, 1956 at the St. John’s Lutheran Church in Beemer, NE. After Bobby’s retirement the couple moved from Beemer to Norfolk in 2006. Bobby enjoyed woodworking with large pieces of furniture, drinking coffee, and eating sweets. Bobby was a member of Our Savior Lutheran Church, Norfolk and American Legion in Beemer. Survivors include spouse Donna Mahnke of Norfolk, children Jon Mahnke of South Yankton, NE, Julie (Stacey) English of Norfolk, 5 grandchildren, 5 great-grandchildren, sister Shirley Raabe of Hadar, sister-in-law RaeOme Conn of Atlantic, IA, and many nieces and nephews. Bobby was preceded in death by his parents Albert and Irene, and brother Billy. Honorary casket bearers will be Hannah English, Dillon Mahnke, Kelsey English, Megan Ausdemore, and Lacey Barnes. Condolences may be expressed to the family on-line at www.stonacekfuneralchapel.com.

NORFOLK -- Memorial service for Bobby G. Mahnke, 90, of Norfolk formerly of Beemer, will be held at 11:00 a.m., Thursday, March 3, 2022 at Our Savior Lutheran Church in Norfolk. Pastor Eric Gradberg will be officiating. Visitation will begin... View Obituary & Service Information

The family of Bobby G. Mahnke created this Life Tributes page to make it easy to share your memories.

Send flowers to the Mahnke family.