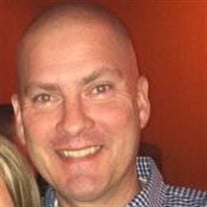 NORFOLK -- Funeral service for Chad B. Melcher, 54, of Stanton will be at 1:00 p.m. Wednesday, November 11, 2020, at Our Savior Lutheran Church in Norfolk. Pastor Lee Weander will officiate. Visitation will be 4-7:00 p.m., Tuesday also at Our Savior Lutheran Church. The service will be live-streamed on the Stonacek Funeral Chapel Facebook page. Stonacek Funeral Chapel is in charge of arrangements. Masks are required. Chad B. Melcher, age 54, passed Wednesday, November 4, 2020. Chad was born September 20, 1966 in Norfolk, NE, the oldest son of Ted and Bette (Osborn) Melcher of Stanton. Chad attended the one room country school District 13 built by his great-great Grandfather and family. Chad attended and graduated from Stanton High School in 1985. He then attended UNL from 1987-1991, graduating with a Bachelor’s Degree in Economics. Chad continued his education at The Graduate Schools of Banking in Colorado. Chad began his banking career at age 16 and found his greatest fulfillment in his relationships with customers. Chad was a warm, funny, fun-loving and spiritual soul. He grew up on a farm near Stanton and had a happy childhood, surrounded by cousins and family. Chad had a quick wit and a keen sense of humor and loved all things baseball, tailgating, and any food that came off of a smoker. He loved and cherished his three daughters. The disease of alcoholism robbed him of those happy times later in life, although he battled to overcome. The many happy memories of Chad will be held dear by his three daughters: Maudie, Dodie and Teddie, of Lincoln; his ex-wife Candy Locke, Lincoln; his mother, Bette Melcher, Norfolk; brother Mark (Tracy) Melcher, Stanton, and sister Amy Caskey, Norfolk, and his nieces and nephew, Audra and Claire Melcher, Cooper, Quincy, Coco and Bo Caskey. He was preceded in death by his father, Ted Melcher, and his grandparents, Arden and Inez Melcher, and Haskell and Dorothea Osborn. Memorials may be made to the Valley Hope of O’Neill, NE, 1421 North 10th St., O’Neill, NE 68763. Honorary casket bearers Chad's Beeson, Weatherholt cousins, Maas cousins, Starkel cousins, and Wagner cousins. Condolences may be expressed to the family on-line at www.stonacekfuneralchapel.com.

NORFOLK -- Funeral service for Chad B. Melcher, 54, of Stanton will be at 1:00 p.m. Wednesday, November 11, 2020, at Our Savior Lutheran Church in Norfolk. Pastor Lee Weander will officiate. Visitation will be 4-7:00 p.m., Tuesday also at Our... View Obituary & Service Information

The family of Chad B. Melcher created this Life Tributes page to make it easy to share your memories.

Send flowers to the Melcher family.