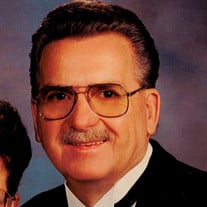 NORFOLK -- Funeral service for Charles "Leonard" Mahlendorf, 81, of Norfolk will be held 10:30 a.m., Thursday, December 9, 2021 at Stonacek Funeral Chapel in Norfolk. Interment will take place at Prospect Cemetery in O'Neill. Visitation will be held one hour prior to service time on Thursday. Military rites will be conducted by the American Legion Post #93, O'Neill and the American Legion Riders. Leonard passed away on Sunday, December 5, 2021 at the Norfolk Veterans Home. The service will be live-streamed and uploaded onto the Stonacek Funeral Chapel website. Stonacek Funeral Chapel is in charge of the arrangements. Leonard was born on September 15, 1940 north of Bristow, NE at his parent’s home to Harry & Esther (Erickson) Mahlendorf. He was raised on a farm with his five siblings. Leonard attended school in Boyd County at rural district #8 and graduated from Spencer High School in May of 1958. After graduation he worked for Ford Garage in Spencer, NE. He had the opportunity of working in a molybdenum mine close to Salida, CO, for one year. Leonard served in the United States Army from October 9, 1963 to October 4, 1965. After receiving his draft papers for the Army, he moved from Boyd County and went to Ft. Leonard Wood, Missouri to complete his basic training. He was assigned to helicopter mechanics in Ft. Rucker, Alabama and then one year later he was sent to the army base in Germany and continued his helicopter mechanics there until being honorably discharged. On January 21, 1967 Leonard was united in marriage to Val Wickersham and to this union 2 daughters, Dranoel & Danielle, were born. They later divorced. Leonard always had a love for working on vehicles which led him to working for Contois Motor Company for many years as a mechanic and service manager. Leonard moved to Norfolk and was united in marriage to Darleen Nickless on December 27, 1997. With this marriage he gained 2 sons, Douglas & Justin, and a daughter, Chrystal. Leonard was a family man and made sure to put those he loved first. In later years Leonard was employed at Cornhusker Imports, Menard’s, and Car Quest retiring in 2015. Leonard’s passion was anything and everything that had to do with cars and racing. Leonard loved to attend as many of his grandchildren’s activities as he could. He enjoyed camping, fishing, and going to the races in his spare time. Leonard was such a special man and made a lasting impact on anyone he met. He liked camping, boating, fishing, Husker Football, playing cards, bowling, traveling, and visiting family and friends. Leonard was very proud of his children, grandchildren, step children, and step grandchildren. Unfortunately, he was not able to enjoy his step-great-grandson. In 2009 Leonard was diagnosed with Parkinson’s Disease. He was a member of First United Methodist Church in Norfolk. He is survived by his wife Darleen of Norfolk, children: Dranoel (Bill) Fleharty of Cozad, Danielle (Will) Hatterman of Tilden, Douglas Johnson of Hot Springs, SD, Chrystal (Dave) Mlnarik of Lincoln, Justin (Jenny) Nickless of Ainsworth. 14 grandchildren: Kalynn (Hank), Raegen, Waylon, & Clatyn Fleharty, Wylie & Brody Hatterman, MaKayla (Brandon) Brazel, Jackson Johnson, Cody, Tristan, Mackenzie, Theron Mlnarik, Hunter & Tatum Nickless, and 1 great-grandson, Dax Brazel, and sister Phyllis Bridge of Woodburn, Oregon. He was preceded in death by his parents, grandparents, uncles, aunts, brothers Duane and Glen, sisters Ramona Allen and Carol Swan, and brother-in-law Dean Johnson. Condolences may be expressed to the family on-line at www.stonacekfuneralchapel.com.

The family of Charles "Leonard" Mahlendorf created this Life Tributes page to make it easy to share your memories.

Send flowers to the Mahlendorf family.