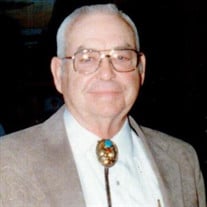 NORFOLK -- Visitation for Charles Arvene McCall, 86, of Norfolk, will be held from 4:00 - 7:00 p.m., Tuesday, August 27, 2019 at Stonacek Funeral Chapel in Norfolk. Graveside service for Charles will be held at 2:00 p.m., Wednesday, August 28, 2019 at Fort McPherson National Cemetery in Maxwell, NE. Charles died Friday, August 23, 2019 at Heritage of Bel-Air Nursing Home in Norfolk. Stonacek Funeral Chapel in Norfolk is in charge of the arrangements. Charles Arvene McCall was born to Ralph and Irene (Aulrich) McCall on Dec. 9, 1932, at the home of Frank Aulrich, his grandparents, in Prosser. He was baptized and confirmed at Christ Lutheran Church south of Prosser. Charles attended School District 14 north of Juniata, finishing his eighth grade in the rural area, starting his high school years in Juniata before moving to Hastings and then back to Juniata, where he graduated in 1950. Charles married Pat Kennedy in July 1950. No children were born to this union. They were divorced in December 1950. Charles did farm work until 1952, before working for the Navy Depot until January 1953. He then went into the U.S. Army on Jan. 29, 1953, where he was stationed at Fort Riley, Kan., for basic training in radio communications. He went overseas in July 1953 and was stationed in England until his honorable discharge on Dec. 14, 1954. After returning home from the service, Charles went back to work at the Navy Depot, as well as Red Pederson’s Service Station until October 1956. Charles then met and eventually married Dorothy Snell on Oct. 14, 1956, at the Methodist Church in Juniata. At this time, they started a ready-made family of a daughter, Linda Lee. Linda made her home with Charles and Dorothy until her marriage to Charles Wiseman in March 1969. Charles was still working at the Navy Depot until he was laid off in 1957. Charles then went to auction school, where he graduated from Mason City, Iowa. Returning from school, Charles found jobs were hard to find as an auctioneer. He then started construction work for Chalmers and Borton, building grain elevators. Charles and Dorothy moved to Wichita, Kan., in 1958, and lived there for a year before moving to Aurora, where he worked for Grain Storage in 1959. They then moved back to Hastings in 1960, and he worked for Westland Homes for a short time. They then moved to Juniata, where he worked for Midwest District until May 1963. At this time, he started driving truck for Hargelroad, hauling refined fuel. He worked there until July 1966, when the company was sold to Herman Brothers in Omaha. Charles drove for Herman Brothers and was transferred to Geneva in 1970, and then in December 1980, the terminal at Geneva was closed. Charles went to Superior, hoping to stay with the company; however, it also closed, laying Charles off once again. Charles worked for Mormon’s Feed Co. for a short time in 1981 before starting back with construction in Geneva as a gravel hauler. He worked there until moving to Norfolk in February 1987, where he then started working for Norfolk Iron and Metal. He worked for NIM for 10 years until his retirement in July 1997 at age 65. Upon his retirement, he has worked part time at various jobs and went to many auctions. He always said if it wasn’t for other people’s junk, I wouldn’t own much. Charles and Dorothy have taken several tours and seen the country. Charles enjoyed hunting, carpentry work, going to watch the grandson’s football games and going to sales, buying junk and some antiques. He was a lifetime member of the American Legion and Disabled American Veterans, as well as a member of the Eagles Club and a summer helper to the Hour of Power. Charles leaves behind to mourn two grandsons, Chad Wiseman of Schuyler and Shawn (Kim) Wiseman of Omaha; six great-grandchildren; one great-great-grandchild; and a host of friends and neighbors. He was preceded in death by his spouse, Dorothy in 2001; a daughter, Linda Wiseman; his parents, Ralph and Irene; and two brothers, Roger and Russell. Casket bearers will be Cole Wiseman, Kailyn Wiseman, Morgan Wiseman, Cade Wiseman, Logan Wiseman, Corbin Wiseman and Declan Wiseman. Condolences may be expressed to the family online at www.stonacekfuneralchapel.com.

The family of Charles A. McCall created this Life Tributes page to make it easy to share your memories.

Send flowers to the McCall family.