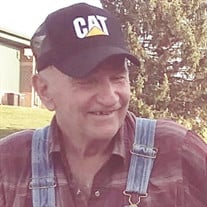 PIERCE — Funeral service for Charles "Charlie" W. Wragge, 71, of Foster will be held at 10:30 a.m., Friday, May 17, 2019 at the Zion Lutheran Church, Pierce, NE. Officiating the service will be Reverend Gordon Bruce. Visitation will be 4:00 p.m. to 8:00 p.m., Thursday at Zion Lutheran Church in Pierce, NE. Private family inurnment will be held at a later date. He died Monday, May 13, 2019, at Faith Regional Health Services in Norfolk. Stonacek Memorial Chapel in Pierce is in charge of the arrangements. Born July 6, 1947, in Norfolk, Charles was the son of Gerald “Jake” and Arlene (Krathovil) Wragge. He was baptized and confirmed at Christ Lutheran Church in Pierce. He graduated from Pierce High School in 1966. On Sept. 24, 1966, at Zion Lutheran Church in Pierce, he married Rita Bomar. The couple lived in the Pierce area. From this union, four children were born: Missy, Jeff, Kathy and Jack. Charlie worked for Midwest Bridge, Gerholds and Wragge’s Construction and farmed all his life. Charlie was a recovering alcoholic for 30 years. Charlie and Rita owned and operated the Chuckwagon in Foster from 2000 to 2011. Charlie could be found daily at Subway in Pierce for lunch. Charlie enjoyed going to the farm and taking care of his sheep and lambs. He was especially proud attending his children and grandchildren’s events. Survivors include his spouse, Rita Wragge of Foster, to whom he was married for 52 years; his children, Missy (Ed) Hoppe of Osmond, Jeff Wragge (Amber) of Pierce, Kathy (Mike) Tinker of Pierce and Jack Wragge (Mayra) of Pierce; nine grandchildren; two great-grandchildren; his siblings, Gerry Kerber of Pierce, Stan (Mary) Wragge of Norfolk and Terry (Pat) Wragge of Pierce; a sister-in-law, Mary Wragge of Pierce; and a host of in-laws, nieces and nephews. He was preceded in death by his parents, Jake and Arlene; his brother, Randy “Metz” and a brother-in-law, Ed Kerber. The family has requested casual dress on the day of the funeral. Music will be provided by organist Dottie Ahlers. Selections include “In The Garden” and “On Eagle’s Wings,” as well as the recorded hymn, “Go Rest High On That Mountain.” Casket bearers will be his grandchildren: Amanda Paulsen, Ethen Hoppe, Emmett Hoppe, Tyler Tinker, Bailey Tinker, Ashton Wragge, Collin Tinker, Brett Tinker and Jacob Wragge. Honorary casket bearers will be his great-grandchildren, Nox and Lux Paulsen. Online condolences may be sent to www.stonacekfuneralchapel.com.

PIERCE &#8212; Funeral service for Charles "Charlie" W. Wragge, 71, of Foster will be held at 10:30 a.m., Friday, May 17, 2019 at the Zion Lutheran Church, Pierce, NE. Officiating the service will be Reverend Gordon Bruce. Visitation will be... View Obituary & Service Information

The family of Charles W. "Charlie" Wragge created this Life Tributes page to make it easy to share your memories.