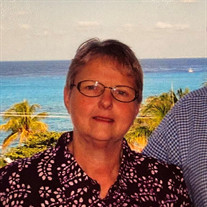 NORFOLK -- Memorial service for Cheryl L. Weinrich, 69, of Crofton formerly of Norfolk will be held at 11:00 a.m., Monday, June 15, 2020 at Stonacek Funeral Chapel in Norfolk with Pastor Tim DeFor officiating the service. A private family burial will take place at a later date. Visitation will be held from 2:00 - 5:00 p.m., Sunday, also at Stonacek Funeral Chapel in Norfolk. Cheryl died on Tuesday, June 9, 2020 at the Avera Sacred Heart Hospital in Yankton. Stonacek Funeral Chapel in Norfolk is in charge of the arrangements. Cheryl was born on November 5, 1950 in Neligh, NE to Bob and Cleo (Schuchardt) Wind. Cheryl attended grade school at Northern Hills elementary in Norfolk and graduated from Norfolk High School. Cheryl then attended Beauty School and Nebraska Christian College in Norfolk. Cheryl lived in Norfolk and worked at Sherwood Medical, which is where Cheryl and Jerry later met. She married Jerry Weinrich on August 13, 1971 at First Christian Church in Norfolk. After marriage, they lived in Norfolk and she operated her in home daycare until 1994. She then worked at Sitel in Norfolk and then later worked at the Bel Air School as a Para until she retired in 2013. Jerry and Cheryl moved to Crofton in 2015. Cheryl enjoyed bird watching, reading, cooking and baking, watching the deer and turkeys, being on the lake in the pontoon, yelling at the squirrels, but most of all she loved spending time with her family every chance she had. She was a member of First Christian Church, Norfolk and the Naomi Circle at First Christian Church. Survivors include spouse Jerry Weinrich of Crofton, children Tammy Weinrich and special friend Jason Duncan of North Sioux City, SD, Andrew Weinrich and special friend Kelly Garner of Crofton, Aaron (Justina) Weinrich of Hoskins, granddaughter Cleo, and siblings Bill (Karen) Wind of Norfolk, and LeAnn (Steve) Daniels of Norfolk. She was preceded in death by her parents Bob and Cleo, and brother Steve Wind. Musician for the service will be Romona Noble. Condolences may be expressed to the family on-line at www.stonacekfuneralchapel.com.

The family of Cheryl L. Weinrich created this Life Tributes page to make it easy to share your memories.

Send flowers to the Weinrich family.