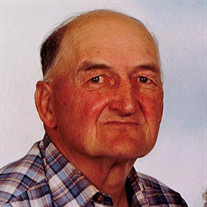 NORFOLK -- Funeral service for Clarence F.F. Krueger Sr., 93, of Norfolk will be held at 10:30 a.m., Thursday, October 28, 2021 at the Stonacek Funeral Chapel in Norfolk. Interment will be at the Prospect View Cemetery, Pierce. Visitation will be 5-7:00 p.m., Wednesday, also at the Stonacek Funeral Chapel in Norfolk. Clarence passed away on Sunday, October 24, 2021 at his daughters residence in Cozad, Nebraska. Military rites will be conducted by the Tomek-Otto Post #72 of Pierce and the United States Army Honors Guard. Stonacek Funeral Chapel in Norfolk is in charge of the arrangements. Clarence was born on March 31, 1928 on a farmstead in Pierce County, Nebraska to Benjamin and Bertha Krueger. Clarence spent his child hood on several farms in Pierce County, attending rural country schools. As a young boy he worked for several area farmers putting in long hours both before and after school. With money he had been able to save he was able to attend high school at Seventh Day Adventist school in Lincoln and Shelton. After high school he joined the United States Army and served from December 12, 1948 to September 2, 1949. He served as a clerk in both Colorado and Washington State. It was while stationed in Washington that he met the love of his life Dorothy Harris. They got married on April 22, 1950. To this union was born eight children. After being in several Nebraska counties they settled in Pauline, NE to raise their family and begin their business of office machine repair. They also began a large organic farm which provided many from far and wide a large variety of produce and plants. Many years of Clarence’s life were spent in volunteerism with the Lion’s Club and the Kiwanis Club. Clarence will be remembered for his dedication to hard work, his love for his family, and most importantly his Lord. He was a member of the Lion’s Club, Kiwanis Club, and was very active in the Seventh Day Adventist Church. Survivors include sons Matthew (Diane) Krueger of Oregon, Bryan (Cheryl) Krueger of Omaha, daughters Alma (Don) Hodges of Cozad, Loretta Harris of North Platte, Christine (Bill) Hall of Pauline, NE, Bonita (Bob) Harrison of Virginia, Anita Krueger of Virginia, daughter-in-law Grace Krueger of Tennessee, numerous grandchildren and great-grandchildren. He was preceded in death by his wife Dorothy, son Clarence Jr., two grandson’s and a great granddaughter. Condolences may be expressed to the family on-line at www.stonacekfuneralchapel.com.

NORFOLK -- Funeral service for Clarence F.F. Krueger Sr., 93, of Norfolk will be held at 10:30 a.m., Thursday, October 28, 2021 at the Stonacek Funeral Chapel in Norfolk. Interment will be at the Prospect View Cemetery, Pierce. Visitation will... View Obituary & Service Information

The family of Clarence Frank Fritz Krueger Sr. created this Life Tributes page to make it easy to share your memories.

Send flowers to the Krueger family.