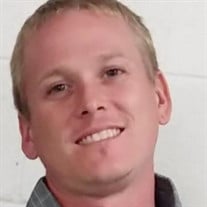 NORFOLK -- Funeral service for Cole T. McGrath, 35, of Omaha formerly of Norfolk will be held at 10:30 a.m., Tuesday, July 6, 2021 at Stonacek Funeral Chapel in Norfolk. Officiating the service will be Rev. Terry Buol. Private family inurnment will be held at a later date. Visitation will be held from 4:00 - 7:00 p.m., Monday, at the Stonacek Funeral Chapel in Norfolk. Cole passed away on Tuesday, June 29, 2021 at his residence in Omaha. Stonacek Funeral Chapel in Norfolk is in charge of the arrangements. Cole Thomas McGrath was born March 28, 1986, in Norfolk to Larry McGrath and Kim Kimmel. He attended Norfolk Public Schools and graduated from Norfolk Senior High School in 2004. He then attended and graduated from Northeast Community College for auto body in 2006. Cole was baptized at the United Methodist Church in Norfolk and was a member at the church. Cole started working at 13 years of age delivering papers for the Norfolk Daily News and he also detassled corn. He then began his career in working at Pizza Hut and then McDonald’s during his time in high school. After graduating from Northeast Community College in 2006, he started his auto body career working at Werner’s Enterprise in Omaha. He moved onto several different jobs with body shops in the Omaha and Lincoln area. He supplemented his income with several part time jobs, including a summer stint at Robinette Organic Farms. He was currently working at Gateway Auto where he was hired as a painter which was a goal he had been wanting since he graduated college. Cole enjoyed snowboarding, skateboarding, biking, drumming, listening to music and bowling. He is survived by his father, Lawrence McGrath Jr. of Norfolk; mother Kim (Mark) Kimmel of Norfolk; sister Erin McGrath of Norfolk; brother Nathan (Lonna) Kimmel of Bellevue; grandmother Sandra McGrath of Norfolk; grandmother Carole Kimmel of Norfolk; and kitty Bandito Pickles McGrath. He was preceded in death by grandfathers Wiley Culbertson, Lawrence McGrath Sr. and Durward Kimmel; grandmothers Beth Culbertson and Barbara Kimmel; uncle John Kimmel; and cousin Andrew Kimmel. Casket bearers will be Nathan Kimmel, Jeremy Hansen, Austen Breitkreutz, Shea Stull, Tyler O’Gorman, Adam “Beanz” Vornhagen, Zach Tunink and Mark Oberhauser. Condolences may be expressed to the family online at www.stonacekfuneralchapel.com.

The family of Cole T. McGrath created this Life Tributes page to make it easy to share your memories.

Send flowers to the McGrath family.