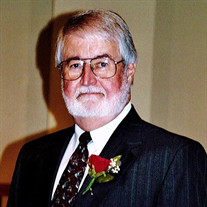 NORFOLK -- Funeral service for Dale P. Nelson, 79, of Pierce will be held at 10:30 a.m., Saturday, November 20, 2021 at the St. Mary's Catholic Church in Norfolk. Father Patrick McLaughlin will be officiating the service. Private family inurnment will be held at a later date. Visitation will be 4:00-7:00 p.m., Friday, at the Stonacek Funeral Chapel in Norfolk with a vigil service beginning at 7:00 p.m. Dale passed away on Tuesday, November 16, 2021 at the Premier Estates of Pierce. Stonacek Funeral Chapel is in charge of the arrangements. Dale Peter Nelson was born Oct. 17, 1942, in Norfolk, the son of Elmer and Irene (Bechtel) Nelson. He spent his childhood in Cornlea, and graduated from Humphrey High School and from Norfolk Junior College. Dale had a long and successful career in sales. He traveled seven states and enjoyed his time on the road. He was district manager for Gamble-Skogmo Inc., a sales representative for Winchester-Western Corporation and a manufacturer representative for Roberts Sales Co. In 1999, he opened the Dale P. Nelson Agency L.L.C. as a manufacturer representative. His customers from all over the United States became dear friends. Dale loved to hunt and enjoyed being in nature. Dale also shot trap. He represented Winchester-Western company at trap shoots. He was “Mr. Winchester.” Dale was a member of St. Mary’s and Sacred Heart Parish in Norfolk, the Rocky Mountain Elk Foundation, Amateur Trapshooting Association, The National Shooting Sports Foundation and Benefactor Life Member of the National Rifle Association. On June 15, 2007, he married Levon Carlisle. She survives him, as do his daughter, Starla (Pete) Wasielewski of Johnston, Iowa; a sister, Dorene (Jerome) Buresh of Norfolk; a sister, Mary (Mick) Kratochvil of Gretna; and numerous nieces and nephews.Dale was preceded in death by his parents, Elmer and Irene, and his grandparents, aunts and uncles. Music for the service will be provided by organist Mary Bruckner and the Bound For Glory Choir. Condolences may be expressed to the family online at www.stonacekfuneralchapel.com.

The family of Dale P. Nelson created this Life Tributes page to make it easy to share your memories.