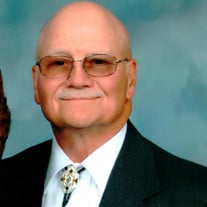 NORFOLK -- Memorial service for Dale Zurcher, 84, of Norfolk will be held at 11:00 a.m., Friday, February 28, 2020 at Our Savior Lutheran Church in Norfolk with Pastor Frank Brink officiating the service. Private family burial will be held at a later date. Dale passed away with his family by his side on Tuesday, February 25, 2020 at his residence in Norfolk. Stonacek Funeral Chapel in Norfolk is in charge of the arrangements. Dale A. Zurcher was born in Stanton on June 15, 1935, to John and Capitola (Thrasher) Zurcher. He came from a family of one brother, Bobby Zurcher, and one sister, Mary Podany. Dale attended school in Stanton and married Ellen Blattert on May 22, 1954. As a young man, he learned the trade of meat cutting. He worked in multiple grocery chains throughout Iowa and Nebraska as he developed into a traveling meat merchandiser. Dale became a meat market manager for Hinky Dinky, which brought him and his family to Norfolk in 1974 until the present. In 1979, he started working for Nucor Steel until he retired in 1998. Dale had a love for training Labrador Retrievers for trials. He competed and qualified for two national amateur field trials. This passion for the trials took him all over the United States for competitions. He was an avid hunter and traveled to Canada, Alaska and went on many trips to the mountains in Colorado, where he developed the love for elk hunting. Dale’s final elk hunt was in his homeland in Nebraska, where he harvested his final cow elk at the age of 76. He was a member of Our Savior Lutheran Church in Norfolk Survivors include his spouse, Ellen Zurcher of Norfolk; four daughters, Shari Stanley of Plano, Texas, Jolene Stone of Loveland, Colo., Tami (Randy) Poole of Fremont and Lori Jones of Neligh; two sons, Robert (Holly) Zurcher of Wilber and Todd (Lori) Zurcher of Erie, Colo.; 18 grandchildren and 38 great-grandchildren. He was preceded in death by his parents, John and Capitola; a brother, Bobby; and a sister, Mary. Organist for the service will be Sallie Pryor with the congregation singing “Lord’s Prayer,” “Beautiful Savior” and “How Great Thou Art.” Condolences may be expressed to the family online at www.stonacekfuneralchapel.com.

NORFOLK -- Memorial service for Dale Zurcher, 84, of Norfolk will be held at 11:00 a.m., Friday, February 28, 2020 at Our Savior Lutheran Church in Norfolk with Pastor Frank Brink officiating the service. Private family burial will be held at... View Obituary & Service Information

The family of Dale Zurcher created this Life Tributes page to make it easy to share your memories.

Send flowers to the Zurcher family.