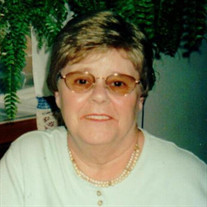 NORFOLK -- Private graveside service for Darlene M. (Wells) Rosendahl, 83, of Norfolk will be held at the Spring Branch Cemetery, rural Norfolk with Pastor Clark Jenkinson officiating. A celebration of life for Darlene will be held at a later date at the Stonacek Funeral Chapel in Norfolk. Darlene died Thursday, April 2, 2020 at the Countryside Home in Madison. Stonacek Funeral Chapel in Norfolk is in charge of the arrangements. Darlene was born on May 9, 1936 in Fairfax, South Dakota to John and Mary Lucille (Harris) Stroh. She attended grade school in Monowi and in Lynch, Nebraska and then attended high school in Lynch. Darlene married Burnell Wells and to this union they had 6 children. She later married Victor "Vic" Rosendahl on June 4, 1977 at the Methodist Church in Hoskins. Darlene was a member at the First United Methodist Church in Columbus. After marriage to Burnell, the family lived in the Hoskins area and she worked at Henningsen Foods in Norfolk. She then later worked out at Sherwood Medical in Norfolk. Darlene and Vic were married in 1977 and they moved to Columbus in 1980 where she worked as a cook at an assisted living center in Columbus until she retired. They moved to Norfolk in 2008. She enjoyed listening to old time music and gospel music, playing cards, shopping, and spending time with her friends and family. Survivors include daughter Alice and husband Kurt Brudigan of Norfolk, NE, daughter Rose Jensen of Plainview, son Roger and wife Pam Wells of Randolph, NE, son Dan Wells of Norfolk, NE, 12 grandchildren, 23 great-grandchildren and 5 great-great-grandchildren, and numerous nieces and nephews, sister Betty and husband Roy Rodgers of Neligh. Preceded in death by spouse Vic on March 25, 2016, parents John and Mary, son Ronnie Wells, daughter LouAnn Jensen, three brothers, and one sister. Condolences may be expressed to the family on-line at www.stonacekfuneralchapel.com.

The family of Darlene M. (Wells) Rosendahl created this Life Tributes page to make it easy to share your memories.