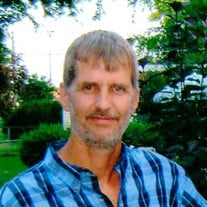 NORFOLK -- Memorial service for David L. "Dave" Andersen, 62, of Norfolk will be held at 11:00 a.m. Saturday, January 25, 2020 at Stonacek Funeral Chapel in Norfolk with Reverend Cara Jensen officiating. Private family inurnment will be held at a later date. Visitation will be held 5:00 - 7:00 p.m., Friday, also at Stonacek Funeral Chapel. David died Tuesday, January 21, 2020 at the Faith Regional Hospital in Norfolk. Stonacek Funeral Chapel in Norfolk is in charge of the arrangements. David L. “Dave” Andersen was born Oct. 5, 1957, in Neligh, the son of Delbert Dean and Margaret (Michaelson) Andersen. He attended grade school in rural district country school, rural Neligh and graduated from Neligh High School. After graduating from high school, Dave went to work for the railroad. He married Barbara “Barb” Buelt on Aug. 18, 1984, at St. Boniface Catholic Church in Elgin. They moved to Norfolk, and Dave started driving truck for various places around town. In the past 10 years, he had been driving truck for Camaco Trucking out of Columbus. Dave enjoyed many hobbies in life, including fishing, hunting, raising his horses and dogs, attending county fairs and the rodeos and being outdoors. Dave’s family and his grandchildren were very important to him, and he loved spending time with them. Survivors include his spouse, Barb Andersen of Norfolk; a daughter, April (Casey) Schwery of Gretna; a son, Shawn (Kim) Andersen of Battle Creek; five grandchildren: Kaleb, Alivia, Kason, Reid and Brinley; siblings Nancy (Gene) Coakley of Kearney and Dana (Karen) Andersen of Albion; a sister-in-law, Lois Andersen-Hast of Iowa; along with numerous nieces and nephews. He was preceded in death by his parents, Delbert and Margaret, and a brother, Dennis. Condolences may be expressed to the family online at www.stonacekfuneralchapel.com.

The family of David L. "Dave" Andersen created this Life Tributes page to make it easy to share your memories.

Send flowers to the Andersen family.