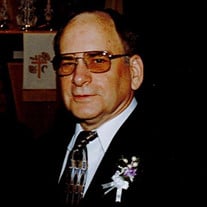 NORFOLK -- Graveside service for David C. “Dave” Mitchell, 79, of Norfolk will be held at 10:00 a.m., Tuesday, June 29, 2021 at the Hillcrest Memorial Park Cemetery in Norfolk. Officiating the service will be Rev. Tim DeFor. No visitation will be held. Dave passed away on Wednesday, June 23, 2021 at the Premier Estates in Pierce. Stonacek Funeral Chapel is in charge of the arrangements. Dave was born on March 31, 1942 in Albany, California to Clifford and Patricia (Lindsey) Mitchell. His parents later divorced and Dave was raised by his mom and step-father James Sheley. Dave grew up in Berkley, California and graduated from Pleasant Hill High School in 1961. Dave served in the United States Air Force from 1961 to 1965. After his discharge, he moved back to California. He married Karen Luhrs in 1967 and to this union they had a daughter, Carolyn. After marriage they moved to California and then later back to Norfolk until they later divorced. Dave later married Merlene Anderson in 1971 and to this union was 2 sons Scott and David Jr. They later divorced. Throughout Dave’s life he worked as a maintenance technician at Sherwood Medical from 1966-1978. He then worked at Goodyear from 1978 until he retired in 2000. He enjoyed collecting guns, hunting, and remodeling homes. David was a member of First Christian Church in Norfolk. Survivors include his children Carolyn of Washington, Dave Jr. of Norfolk, Scott of Norfolk, 2 grandchildren Sydney and Aubrie, 3 great-grandchildren, ex-wives Karen, Merlene, and Micki. He was preceded in death by his father Clifford, mother Patricia, stepfather Jim, several aunts and friends from California. Condolences may be expressed to the family on-line at www.stonacekfuneralchapel.com.

The family of David C. "Dave" Mitchell created this Life Tributes page to make it easy to share your memories.

Send flowers to the Mitchell family.