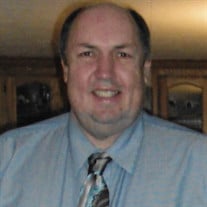 OSMOND -- Funeral service for David M. Streich, 61, of Ainsworth formerly of Osmond, will be held at 10:30 a.m., Thursday, May 30, 2019, at the Immanuel Lutheran Church in Osmond, with Reverend Glen Emery and Reverend Dr. Georg D. Williams officiating the service. Burial will take place at the Immanuel Lutheran Cemetery, rural Osmond. Visitation will be held from 4:00 - 7:00 p.m., Wednesday, also at the Immanuel Lutheran Church in Osmond. There will also be a Memorial Service for David starting at 7:30 p.m., Tuesday, June 4, 2019 at the Zion Lutheran Church in Ainsworth. David passed away Thursday, May 23, 2019 at the Osmond General Hospital. Stonacek Memorial Chapel in Osmond is in charge of the arrangements. David Streich was born Oct. 16, 1957, in Plainview to Donald and Joan (Wingert) Streich. He was baptized on Nov. 10, 1957 and confirmed on May 21, 1972, both at Immanuel Lutheran Church in Osmond. He graduated from Plainview High School in 1976, earned his undergraduate degrees in political science and accounting from Mount Marty College in Yankton, S.D., and was accepted in law school at Creighton University, graduating in May of 1983 with a juris doctor law degree. After graduating from law school, David first started working as an attorney for Curtis Baird in Plainview before being deputy Knox County attorney from July of 1985 to October of 1987. David then went on to be the county attorney in Brown County for 32 years. He retired as Brown County Attorney and was then reappointed as the deputy county attorney. Through the years, David coached the Ainsworth High School mock trials team for 25 years and won state two times. He enjoyed farming for many years, gardening, watching Creighton Basketball and the Nebraska Cornhuskers and playing in many golf tournaments with Dr. Jones. He was also a member of the Ainsworth Men’s Golf League. David loved spending time with his family and taking his nieces shopping on Black Friday. David courageously lost his life due to a long battle with cancer that started in December of 2009. He is survived by his parents Don and Joan Streich of Osmond, siblings Dr. Douglas Streich of South Bend, Indiana, Donna (Mark) Swartzendruber of Shickley, two nieces Megan (fiancé Chris Loy), Nicole and one nephew Caleb. Lori Koehler will be the organist for the service, and Dallas Steckelberg will be the pianist. The congregation will sing “Amazing Grace,” “Fight The Good Fight,” “Eternal Father Strong To Save” and “The Battle Hymn Of The Republic.” Casket bearers will be Jared Wingert, Michael Wingert, James Wingert, Steve Broekemeier, Kyle Streich, Tom Wingert, Aaron Becker, and Dr. James Steckelberg. Honorary casket bearers will be Dr. Allan Tramp, Dr. David Jones, Judge Tom Harmon, Tim Sinsel, Mike Kreycik, Bruce Papstein, Todd Flynn, Avery Gurnsey, Dwight Kahny and Jerry Troshynski. Condolences may be expressed to the family online at www.stonacekfuneralchapel.com.

The family of David M. Streich created this Life Tributes page to make it easy to share your memories.

Send flowers to the Streich family.