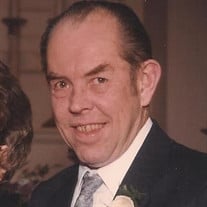 NORFOLK -- Dean E. Wohlers, 80, of Hemingford, Nebraska entered eternal rest on Saturday, July 13, 2019 at the Heritage of Bel Air nursing home in Norfolk. Dean was born in Crawford, NE in 1939 to George and Nellie Wohlers. He attended grade school at Highland Center in rural Dawes County and graduated from Chadron High School, Class of 1957. Upon graduation, he served for three years in the United States Army as a diesel mechanic. Dean worked as a farmer, rancher, lumber jack, and oil rig worker before moving to Casper, WY where he worked for Coleman Construction. He excelled at operating the backhoe but could operate anything with an engine and tires. In 1972 he moved his family back to Crawford, NE to help his parents with the family farm. Once the boys were grown, he and his wife purchased KC's Bar and Grill in Hemingford, NE. He enjoyed gardening, camping, fishing, and spending time with family and friends. Dean married Janice Laurene Noble in March 1965 at the Crawford Methodist Church. He was preceded in death by his parents and wife. Dean is survived by sons Marty Wohlers of Norfolk, Wayne (Evelyn) Wohlers, grandson, Bradly (Jessica), granddaughters Julia and Olivia Wohlers of Columbia, MD, sister-in-law Bonnie Noble of Chadron, NE, nieces Leah (Noble) Nikont and husband Kurt, their children Blake, Brock, Bailey of Scottsbluff, NE, niece Renae Noble, and her children Ashlynne, Alyssa, and Aubree of Chadron, NE. Dean’s family wishes to give special thanks to Sandy Veik and her daughter Grace for managing his many needs and everything related to his well-being during the last year he spent in Norfolk. We would also like to thank Karla Mapes, Jess Huss, and her family for the love and support given to him over the years he lived in Hemingford, NE. Dean’s wishes were to have his body donated to science. A celebration of life will take place in approximately two years in Hemingford, NE when his remains are returned for burial. Arrangements were placed in the care of Stonacek Funeral Chapel, Norfolk, NE. Direct donations can be made in memory of Dean Wohlers to the Hemingford Volunteer Fire Department. Condolences may be expressed to the family on-line at www.stonacekfuneralchapel.com.

The family of Dean E. Wohlers created this Life Tributes page to make it easy to share your memories.

Send flowers to the Wohlers family.