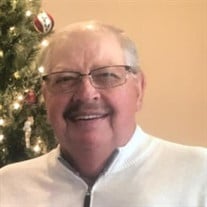 Hadar -- Memorial service for Delbert A. Dinkel, 76, of Pierce will be held at 10:30 a.m., Saturday, February 6, 2021 at the Immanuel Lutheran Church in Hadar. Officiating will be Rev. Austin Ziche. Private family inurnment will be held at a later date. Visitation will be 4:00-7:00 p.m., Friday, also at the Immanuel Lutheran Church in Hadar. Face masks are required for the visitation and service. Delbert passed away on Tuesday, February 2, 2021 at his residence in Pierce. Stonacek Memorial Chapel in Pierce is in charge of the arrangements. 1944-2021 Born May 18, 1944, in Norfolk, Delbert A. Dinkel was the son of Lowell and Pearl (Reeg) Dinkel. He was baptized on June 18, 1944, at his grandparents’ home, Albert Dinkel, by Pastor Spaude and was confirmed on May 24, 1959, at Immanuel Lutheran Church in Hadar. Delbert grew up on the farm south of Pierce. He graduated from Pierce High School in 1963. He married Judith Koeppe on May 26, 1963, in Yankton. Delbert and Judy farmed south of Pierce for 28 years. In 1993, the couple moved to Omaha and was employed by Commercial Investment Properties. In 1995, the couple moved to Lincoln working for the same company. They retired in 2007 and moved back to Pierce. Delbert enjoyed helping the Kroupa family farm during planting and harvest season. He loved horses and hunting. In his later years, he enjoyed fishing, bowling, golfing and playing cards. He was a member of Immanuel Lutheran Church in Hadar and held various church offices. Survivors include his spouse, Judy Dinkel of Pierce; a son, Robbie (Ruth) Dinkel of Columbus; daughters Debra Hanson and Michael Hicks of Phoenix, Ariz; Gina (Darin) Dux of Pella, Iowa; five grandchildren; two great-granddaughters; a sister, Ilene Anderson of Gering; and a brother-in-law, Ron Mueller of Norfolk. He was preceded in death by his parents, Lowell and Pearl; a sister, LaVonne Mueller; and a brother-in-law, Robert Anderson. Music will be provided by organist Amy Bretschneider with congregational hymns “How Great Thou Art,” “What A Friend We Have In Jesus” and “I’m But A Stranger Here.” Online condolences may be sent to www.stonacekfuneralchapel.com.

Hadar -- Memorial service for Delbert A. Dinkel, 76, of Pierce will be held at 10:30 a.m., Saturday, February 6, 2021 at the Immanuel Lutheran Church in Hadar. Officiating will be Rev. Austin Ziche. Private family inurnment will be held at a... View Obituary & Service Information

The family of Delbert A. Dinkel created this Life Tributes page to make it easy to share your memories.

Send flowers to the Dinkel family.