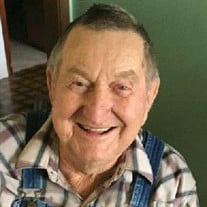 McLEAN -- Funeral service for Delmar D. Pfanstiel, 90, of McLean, will be held at 10:30 a.m., Saturday, June 29, 2019 at the Immanuel Lutheran Church in Osmond with Rev. Glen Emery officiating. Interment will be at the Immanuel Lutheran Cemetery, rural Osmond. Visitation will be 4:00-7:00 p.m., Friday, also at the church in Osmond. Delmar died Monday, June 24, 2019 at Faith Regional Health Services in Norfolk. Stonacek Memorial Chapel in Osmond is in charge of the arrangements. Delmar Duane Pfanstiel, son of Herman and Frieda (Mohr) Pfanstiel, was born March 26, 1929, on a farm near Wausa. He was baptized at Immanuel Lutheran Church in Osmond on April 21, 1929. Delmar attended Bunker Hill School through sixth grade, Immanuel Lutheran School for seventh and eighth grades, and Osmond High School for ninth and 10th grades. He was confirmed April 2, 1944, in Osmond where he was a life-long member. Delmar grew up in Wausa and worked on the family farm until 1941. He worked for Armour Packing Plant in Sioux City, Iowa, for four winters in the early 1950s. He continued farming until the early 2000s, but still helped his sons with field work until last fall. He enjoyed fishing, hunting and going to Bible class. Having a strong passion in building, he built his dairy farm from ground up and enjoyed helping others with their projects as well. He was also proud to have been associated with the Northern Nebraska United Insurance Company, serving on the Board of Directors and selling insurance for 56 years. He married Elda Stelling on Feb. 22, 1953, in Orchard. They had five children, Bernita (Doug) Bauer, Randy (Janet), Diane (Don) Short, Kevin (Sheri Albrecht) and Gene (Julie). Elda died on Jan. 1, 2007. He is survived by his second wife, Arlene (Lenser) who he married in Osmond in 2009. He also leaves a legacy of 19 grandchildren and 31 great-grandchildren. He was preceded in death by his parents; brothers Norris and Gary; wife Elda; grandson Jeremy Bauer; and great-grand-daughter Lennon Pfanstiel. In lieu of flowers, Delmar has requested that memorials be made to the Beckendorf Ministry (Lutheran Bible Translators). Checks can be made out to the Immanuel Lutheran Church with Beckendorf Ministry in the memo. Condolences may be expressed to the family on-line at www.stonacekfuneralchapel.com.

The family of Delmar D. Pfanstiel created this Life Tributes page to make it easy to share your memories.

Send flowers to the Pfanstiel family.