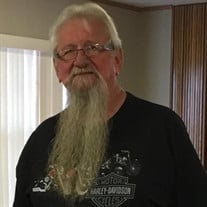 NORFOLK -- Memorial service for Dennis L. Jones, 69, of Norfolk will be held at 10:30 a.m., Saturday, March 12, 2022 at First Christian Church, Norfolk. Marshal Hardy will be officiating the service. Family inurnment will be held at a later date at Hillcrest Memorial Park Cemetery, Norfolk. Visitation will take place from 4:00 - 7:00 p.m., Friday, at Stonacek Funeral Chapel, Norfolk. Dennis passed away on Friday, March 4, 2022 in Rapid City, SD as a result of a vehicle accident. Stonacek Funeral Chapel is in charge of the arrangements. Dennis was born on August 26, 1952 in Norfolk to Leonard and Marcella (Tomasek) Jones. Dennis attended grade school at Norfolk Public and graduated from Norfolk High School in 1971. After graduating, Dennis moved to Bartlett, NE to become a ranch hand. Dennis married the love of his life Sherrilee Bisping on May 16, 1975 at First Presbyterian Church, Norfolk. Sherri was able to get Dennis to move from Bartlett back to Norfolk where he had various jobs before joining the Vulcraft workforce. Dennis worked for Vulcraft for 43 years before he decided to retire. Dennis enjoyed many things in life such as gardening, hunting, fishing, riding motorcycles, being outdoors, pulling practical jokes, and cooking. Dennis was a proud winner of an Oliver tractor from the Pierce County Threshing Bee, of which he only bought a $5 raffle ticket. Dennis loved getting together and telling stories and making memories. He always enjoyed his friends and a cold beer at the Off-Road Ranch “Board Meeting.” Dennis was a good husband, father, grandfather, and hard worker. Dennis enjoyed many trips to Sturgis, especially his last trip with just his two sons. Dennis was a member of the American Legion Riders and Abate District 15. Survivors include wife Sherri Jones of Norfolk, children Cory Jones of Norfolk, Colby (Sara) Jones and their children Peyton and Easton of Norfolk, sister’s Judy Miller of Lincoln, Janice (Terry) Jensen of Norfolk, Tammie Jones of Norfolk, Karen Jones of Norfolk, Kellie (Denis) Hansen of Norfolk, and many nieces, nephews, and cousins. Dennis was preceded in death by parents Leonard and Marcella, and brother in infancy Duane. Honorary casket bearers will be Terry Riege, Wayne Christiansen, Jim Herscheid, Roger Hale, Bill Eilerts, Pete Wiley, Darcy Gansebom, Kirk Lee, Dan Painter, and Dennis Grimm. In lieu of flowers memorials may be made to the family for later designation. Condolences may be expressed to the family on-line at www.stonacekfuneralchapel.com.

NORFOLK -- Memorial service for Dennis L. Jones, 69, of Norfolk will be held at 10:30 a.m., Saturday, March 12, 2022 at First Christian Church, Norfolk. Marshal Hardy will be officiating the service. Family inurnment will be held at a later... View Obituary & Service Information

The family of Dennis L. Jones created this Life Tributes page to make it easy to share your memories.

Send flowers to the Jones family.