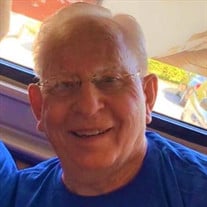 NORFOLK – Memorial service for Dick R. Adams, 84, of Norfolk will be held at 10:30 a.m., Saturday, December 18, 2021 at the St. John’s Lutheran Church in Norfolk. Rev. Randy Rasmussen will be officiating the service. Private family inurnment will be held at a later date at Prospect Hill Cemetery, Norfolk. Visitation will be 4:00-6:00 p.m., Friday, also at St. John’s Lutheran Church, Norfolk. Military rites will be conducted by the American Legion Post #16, V.F.W. Post #1644, and the United States Army Honors Guard. Dick passed away on Tuesday, December 14, 2021 at the Faith Regional Hospital in Norfolk. Stonacek Funeral Chapel is in charge of the arrangements. Dick was born on September 4, 1937 to George and Gladys (Weander) Adams in Long Pine, Nebraska. Dick attended a rural country school south of Bassett. He served his country in the United States Army in Europe from June 1, 1956 to March 23, 1958. Dick later graduated from Omaha School of Barbering and Northeast Community College with AA Degree in business. Dick married Barbara Hawes on July 21, 1963 at Our Savior Lutheran Church in Council Bluffs, IA. After a few years the couple moved to Norfolk on December 1, 1966. Once the couple established themselves in the Norfolk area had two children Michael and Ann. Dick has been a member of St. John’s Lutheran Church in Norfolk since January of 1967. Dick barbered for 52 years; 3 years in Omaha and he later owned and operated Dick’s Barber Shop in Norfolk the remaining years. Dick retired in September of 2014. He enjoyed playing slots at the casino, reading, fishing with his children and grandchildren, traveling throughout the United States and Europe with his wife Barb, and spending time with his family. He is survived by his spouse Barbara Adams of Norfolk, son Michael (Diane) Adams of Omaha, daughter Ann (Troy) Austin of Norfolk, 3 granddaughters; Allison Sothan (Peter Biedenweg), Cameron Sothan, Lindsay Adams, 2 step-grandchildren Ty (Alex) Austin, Haley (Trevor) Belina, and 3 step-great-grandchildren Tate Austin, Wyatt Belina, Barrett Belina, and sisters-in-law; Donna (Ernest) Elich of Medford, OR, and Elaine Adams of Omaha. He was preceded in death by his parents George and Gladys, brothers George Jr., and Jack. Condolences may be expressed to the family on-line at www.stonacekfuneralchapel.com.

The family of Dick R. Adams created this Life Tributes page to make it easy to share your memories.

Send flowers to the Adams family.