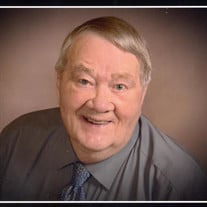 MADISON – Memorial service for former Madison Mayor Donald G. "Don" Maybon, 80, and Sandra M. “Sandy” Maybon, 80, of Norfolk formerly of Madison will be held at 1:00 p.m., Saturday, August 1, 2020 at the Trinity United Methodist Church in Madison with Rev. Donna Goltry officiating. Inurnment will be held at 2:30 p.m., Saturday at the Prospect Hill Cemetery, Norfolk. Visitation will be from 11:00 a.m. to 1:00 p.m., Saturday, prior to the service also at the church. Military rites will be conducted by the American Legion Post 35, V.F. W. Post 5763, both of Madison, Nebraska American Legion Riders, and the United States Army Guard. The memorial service will be live streamed on the Stonacek Funeral Chapel Facebook page. Sandy passed away Monday, July 20, 2020 at the Faith Regional Hospital in Norfolk and Don passed away Wednesday, July 22, 2020 at the Faith Regional Hospital. Stonacek Funeral Chapel in Norfolk is in charge of the arrangements. Don was born April 14, 1940 in St. Edward, Nebraska to Everett and Mildred (Carlson) Maybon. Don attended grade school in Albion and graduated from Albion High School. After his education, Don served in the United States Army from February 28, 1958 to June 2, 1960, and he served in Germany. Sandy was born May 4, 1940 in Sioux City, Iowa to Clifford and Thelma (Robbins) Nelson. Sandy attended grade school in Ringsted, Iowa and graduated from Ringsted High School. She then attended and graduated from Wayne State College with a teaching degree. Don and Sandy (Nelson) were married on August 14, 1960 in the Ringsted Presbyterian Church in Ringsted, Iowa. They were the first to be married in the Presbyterian Church. After marriage, Don and Sandy lived in Columbus, Belgrade, Albion, and then Madison in 1970. Sandy taught education for 37 years in Columbus, Albion, Cedar Rapids, and Madison (St. Leonard’s and Public) until she retired. She never fully retired as she substitute taught in the Madison area. Don owned and operated the San Anna restaurants for 25 years in Madison and Fullerton until he retired in 2010. The couple moved to Norfolk in 2015. Don enjoyed fishing, traveling with Sandy and family, gardening, golfing, gambling, cooking, and spending time with grandchildren. Sandy enjoyed reading, shopping, getting ready for Christmas, finding interactive activities for children’s events, helping with church activities, traveling with Don and her family, gambling, having coffee and lunch with her friends, and playing card games, but most of all spending time with her grandkids. Don and Sandy would have been married 60 years on August 14th. The family will be celebrating on Don and Sandys special day by going to their favorite vacation spot in Minnesota. Don and Sandy were members of Trinity United Methodist Church in Madison and just recently became members at Westridge United Methodist Church in Norfolk. Don was a member of the American Legion for 56 years, Madison City Council for 16 years, Mayor for 4 years, and the Madison JC’s, drove the VA van. Sandy taught Sunday school and bible school, was a member of PEO, Delta Kappa Gamma, Bonnet Bunch, Genesis Circle, Madison Library Board, she was co-chairman of Cat in the Hat (2004-2016), Book Banquets (2006-2010), and Science Expo (2011-2017). Survivors include their children Beth (Bill) Laible of Atkinson, Scott (Chrissy) Maybon of Bennington, 4 grandchildren, Sami (Josh) Wyrick, Lukas Laible, Jordyn Maybon, Jaret Laible, Don’s sister Betty Rieken of Grand Island, and Sandy’s siblings Wayne Nelson, Cheri Sterling, Cindy (Stew) Schuenke all of Faribault, Minnesota, and Don (Myra) Nelson of Orange City, Iowa. Don was preceded in death by his parents Everett and Mildred, sister Darlene Nathan, brother Robert Maybon, and 2 brothers in infancy. Sandy was preceded in death by her parents Clifford and Thelma, sister-in-law Glenda Nelson, and brother-in-law Jim Sterling. The family requires that facemasks be worn at the visitation and the memorial service. In lieu of flowers, the family requests United States flags for flag poles. Condolences may be expressed to the family on-line at www.stonacekfuneralchapel.com.

The family of Donald G. "Don" Maybon created this Life Tributes page to make it easy to share your memories.

Send flowers to the Maybon family.