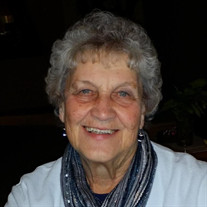 NORFOLK -- Service for Donna Dell Robinson, 82, of Norfolk will be held at 1:00 p.m., Saturday, February 6, 2021 at the Stonacek Funeral Chapel in Norfolk. Burial will be held at the Prospect Hill Cemetery, Norfolk. Visitation will be 4:00-8:00 p.m., Friday, also at the Stonacek Funeral Chapel in Norfolk. Donna passed away from a heart attack on Friday, January 29, 2021 at the Faith Regional Hospital in Norfolk. The funeral service will be live-streamed on the Stonacek Funeral Chapel Facebook page. Masks are required for both the visitation and funeral service. Stonacek Funeral Chapel in Norfolk is in charge of the arrangements. Donna Dell (Hinken) Robinson was born on January 30, 1938 in Norfolk, NE to Richard J. and Adele S. (Girardin) Hinken. She worked with her family on the farm and enjoyed raising animals, riding horses, and doing chores. She was a mere 14 years old when she independently drove her first semi-truck. She rode her horse Patches to the rural country school near Norfolk and graduated from Norfolk High School in 1956. She married Eldon L. Robinson in 1958 and the couple lived in Iowa for 3 years. They later moved to a farm near Randolph in 1961 and lived there for 25 years raising their 6 children. She was a very active farm wife who was involved in all aspects and operations of farm life. Donna then moved to Norfolk in 1990. Donna worked for Jerry’s Hilltop from the late 1970’s into the early 1990’s. Those she worked with have many fond and fun memories of her time there that they still talk about today. Donna later worked for her brothers at Hinken Truck Line, the family company, starting in 1985. In 1987 she also started working for the National Agricultural Statistics Service (NASDA). She enjoyed her work so much that she worked her way up to a supervisory position and held that for many years. Talking with the farmers was the highlight of her day. She was so dedicated to completing her assignments that more than once she crawled on the tractor with the farmer in the field to gather the information needed. Those she worked with for over 30 years at NASDA, become like a second family to her. She was currently still working at both jobs. Retirement was not a word in her vocabulary. Through her life she was involved in many organizations and clubs. She was active as a 4-H Leader for both the A&E Girls 4-H Club and the Allen Eastern Livestock Club as well as the 4-H Extension Board. Church activities included Sunday School Teacher, Couples Club and Luther League Sponsor at St John's in Randolph. Eldon and Donna logged many miles attending Pork Producer meetings at the local, state and national level. Donna was a founding member of the Nebraska Porkettes. She also enjoyed the Neighborhood Kountry Klub Extension meetings. As a parent of 6 kids, she was involved in numerous school activities throughout the years, including chaperoning many events, having as much fun as the kids did. In later years, she was a member of the Kingdom Hall of Jehovah's Witnesses. Donna loved meeting new people and welcoming everyone into her home. She never met a stranger. Mom loved being surrounded by family, as her family was her life. Her big, beautiful smile, kind heart, and generous spirit will never be forgotten. Her laughter was so genuine and heartfelt that it was contagious to everyone around her. When she laughed, you couldn't help but laugh with her, a quality that will be greatly missed by everyone who knew her. She loved big gatherings, she loved small gatherings, she loved one-on-ones, she just loved being around family. Her DDR license plate was seen traveling many miles, many highways and country roads, many places throughout a few states. You just never knew where that darn DDR plate would show up. Slowing down was just not in her nature, not something she ever considered. Mom was especially loved by her children. Grandma was loved by her grandchildren. Great-Grandma / Nana was loved by her great grandchildren. She was absolutely the best mom ever. Survived by her children; Deborah and Richard Olson of Randolph, NE, Shelly and Ted Fuchs of Ellis, KS, Joni Robinson and Jerome Thomas of Las Vegas, NV, Lori Watts of Lincoln, NE, Corby and Salle Robinson of Randolph, NE. She also has 14 grandchildren and 28 great grandchildren with the 29th due in March; Jeremy and Sharel Olson, Randolph, NE and children Patrick, Blake, Ethan, Carter, Emilee, Gabriel and Olivia. Joshua and Amy Olson of Blair, NE and children Mikayla and Nolan. Justin and Kari Olson of Pierce, NE and children Kaylee and Keaton. Jesse and Elizabeth Olson of Bennington, NE. Derric and Tasha Fuchs of Ness City, KS, and children Cameron, Brandon, Isabelle and Avery. Trista and Willie Hughes of Pueblo, CO, and children Connor and Kellan. Gideon and Danielle Fuchs of Brownell, KS and daughter Oakley. Logan Fuchs of Lincoln, NE. Daryl and Jodi Krause of York, NE and children Araya, Marsavion, Dezmond, Tavious, Javari and Robert. Elijah and Katie Watts, Brainard, NE and children Keali, Evea and Ezekiel. Tabor Watts & fiancee Wyatt Merwick, and children Dominic and Roman (due in March). Sydney Robinson and Corby (CJ) Robinson of Randolph, NE. A brother Dale and Jackie Hinken of Norfolk. And many nieces, nephews and extended family. She was preceded in death by her daughter Kerry Robinson, grandson Domonic Watts, parents Richard and Adele Hinken, brothers Jack, Bill, and Dick, sister Margaret Mass. Condolences may be expressed to the family on-line at www.stonacekfuneralchapel.com.

NORFOLK -- Service for Donna Dell Robinson, 82, of Norfolk will be held at 1:00 p.m., Saturday, February 6, 2021 at the Stonacek Funeral Chapel in Norfolk. Burial will be held at the Prospect Hill Cemetery, Norfolk. Visitation will be 4:00-8:00... View Obituary & Service Information

The family of Donna Dell Robinson created this Life Tributes page to make it easy to share your memories.

NORFOLK -- Service for Donna Dell Robinson, 82, of Norfolk will...

Send flowers to the Robinson family.