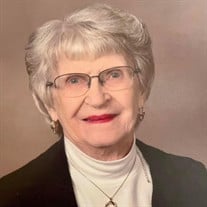 PIERCE -- Funeral service for Dorathea E. "Dory" Parks, 90, of Pierce will be held at 10:30 a.m., Wednesday, November 17, 2021 at the Zion Lutheran Church in Pierce. Rev. Gordon Bruce and Vicar Chad Berg will be officiating. Private family burial will be held at a later date at the Evergreen Cemetery in Alexandria, South Dakota. Visitation will be 4:00-7:00 p.m., Tuesday, Nov. 16 also at the Zion Lutheran Church in Pierce. The service will be live-streamed on the Stonacek Funeral Chapel Facebook page. Dory passed away on Saturday, November 13, 2021 at her residence in Pierce with her family by her side. Stonacek Memorial Chapel in Pierce is in charge of the arrangements. Dorathea Parks was born June 24, 1931, in Alexandria, S.D., the daughter of Nathaniel and Dora (Wudel) Parks. She grew up in Alexandria, where she was baptized and confirmed at St. Martin’s Lutheran Church. She graduated from Alexandria High School in 1949. She and her family lived in Alexandria until she met and married Gene Parks on Oct. 22, 1949, at St. Martin’s Lutheran Church in Alexandria. They moved around the state of South Dakota quite a bit while Gene worked for The Corps of Engineers. Dory and Gene along with their daughters, Andie and Caryl, moved to Cape Canaveral, Fla., while he worked on the engineering project until 1966. They moved to Omaha from 1969 to 1997 and made so many wonderful friends. In 1980, the family purchased a cabin in the Black Hills. The cabin was a labor of love and a huge part of wonderful memories made for the entire family. Dory loved her family very much and their times together. She was a big Pierce Bluejay sports fan. After Gene passed in 1999, Dory decided to move to Pierce in 2001 to be closer to her daughter, Caryl, and grandchildren. She loved living at the Marshall Grove Apartments, where the residents all became her second family. She enjoyed playing cards, going on drives and watching the Nebraska Cornhuskers. Survivors include her daughters, Andie Golden of Augusta, Ga., and Caryl Schultz of Pierce; grandchildren and great-grandchildren, Joanna Hooker, children Matthew, Aldde and Zachary, Jennie (Chris) Vaughn, children Daniel and Kayla, Drew (Shawn) Schultz, children Stella and Charlotte, Cara (Max) Froehlich, children Lindy and Lane, Courtney (Trey) Boyer, child Carter, Connor (Sarah) Schultz. She was preceded in death by her parents, Nathaniel and Dora; spouse Gene; son-in-law Warren Golden; sisters Martha Vining and Myrtle Wuedel; and three brothers, Herman, Edwin and Alfred. Music for the services will be provided by organist Linda Peekenschneider playing congregational hymns “In The Garden,” “It Is Well With My Soul,” “Abide With Me” and “Amazing Grace.” Casket bearers will be Drew Schultz, Connor Schultz, Max Froehlich, Trey Boyer, Matthew Hooker and Randy Sunderman. The service will be live steamed on the www.stonacekfuneralchapel Facebook page. In lieu of flowers, memorials may be designated to the family. Condolences may be expressed to the family online at www.stonacekfuneralchapel.com.

The family of Dorathea E. "Dory" Parks created this Life Tributes page to make it easy to share your memories.

Send flowers to the Parks family.