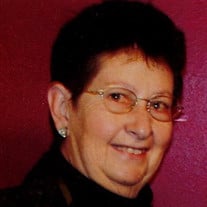 OSMOND -- Funeral service for Doyle Y. Timmerman, 80, of Osmond will be held at 10:30 a.m., Wednesday, October 20, 2021 at the Immanuel Lutheran Church in Osmond. Rev. Leon Rosenthal will be officiating the service. Interment will be held at the Immanuel Lutheran Cemetery, rural Osmond. Visitation will be held 4:00-7:00 p.m., Tuesday, also at the Immanuel Lutheran Church in Osmond. Doyle passed away on Saturday, October 16, 2021 at the Faith Regional Hospital in Norfolk. Stonacek Memorial Chapel in Osmond is in charge of the arrangements. Doyle Yvonne Timmerman, daughter of Carl and Elsie (Davids) Pfanstiel, was born July 25, 1941, in Rushville. She attended school at Immanuel Lutheran School and Osmond High School. On Nov. 14, 1959, Doyle was united in marriage to Ralph Timmerman at Immanuel Lutheran Church in Osmond. They were blessed with four children: Todd, Tamela, Kim and Craig. Ralph and Doyle lived in several places throughout Nebraska while Ralph worked road construction for the first seven years of their marriage. In 1967, they started farming in the Eden Valley area. In 1976, they purchased a farm by Midland and lived there until 2002. In 2002, they purchased a house in Osmond. Doyle worked at Wattier True Value and Laurel True Value from 1992 to 2012. Doyle enjoyed spending time with her family traveling, boating, camping, doing crafts and sewing. She was a member of Immanuel Lutheran Church in Osmond. Survivors include her spouse, Ralph Timmerman of Osmond; sons Todd (Pam) Timmerman of Plainview, Craig (Jami) Timmerman of Wausa; daughters Tammy (Bruce) King of Osmond and Kim (Scott) Wattier of Randolph; seven grandchildren; 13 great-grandchildren; a sister, Darlean Moore of Iowa City, Iowa; and many nieces and nephews. She was preceded in death by her parents, Carl and Elsie Pfanstiel; sister Ruth Wagner and brothers-in-law Don Wagner and Al Moore. Organist will be Lori Koehler, playing congregational hymns “I Was There To Hear Your Borning Cry,” “How Great Thou Art,” “Amazing Grace” and “Old Rugged Cross.” Casketbearers will be Tonya Strom, Tara Gragert, Troy Timmerman, Tabetha Morris, Shelby Timmerman, Ashlynn Timmerman and Preston Wattier. Condolences may be expressed to the family online at www.stonacekfuneralchapel.com.

OSMOND -- Funeral service for Doyle Y. Timmerman, 80, of Osmond will be held at 10:30 a.m., Wednesday, October 20, 2021 at the Immanuel Lutheran Church in Osmond. Rev. Leon Rosenthal will be officiating the service. Interment will be held at... View Obituary & Service Information

The family of Doyle Y. Timmerman created this Life Tributes page to make it easy to share your memories.