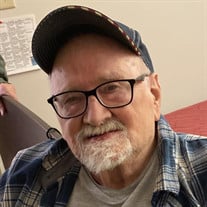 PIERCE -- Memorial service for Duane E. Jelinek, 86, of Pierce will be held at 10:30 a.m., Friday, October 23, 2020 at Stonacek Funeral Chapel in Norfolk with Rev. Cara Jensen officiating. Family burial will take place at a later date. Visitation will be held one hour prior to service time on Friday. Duane died on Tuesday, October 20, 2020 at Faith Regional Health Service in Norfolk. Stonacek Memorial Chapel in Pierce is in charge of the arrangements. Born Dec. 2, 1933, in rural Pierce, he was the son of Frank and Emma (Synovec) Jelinek. He attended School District 40 through eighth grade. After school, Duane went to St. Louis to work for his uncle in a restaurant and bar. He married Shirley Ingram on Aug. 16, 1952, in Rockford, Ill. They lived in Illinois until 1970, when they moved to Palm Springs, Calif. Duane worked for McDonnell Douglas, making Apache Helicopters. After Shirley died in March 1986, Duane retired and moved to Foster, where he lived for a few years. Duane moved to Humboldt to be closer to his daughter, Sandi. After Sandi passed away in 2019, Duane moved to the Premier Estates in Pierce. Survivors include his children, Diane (Kenneth) Wieting of Pierce, John Jelinek of St. Louis, Mo., and Jacqueline (Vonetta) Jelinek of Laguna Hills, Calif.; his sisters, Marion Staberg of California and Marcia Harris of Texas; many grandchildren, great-grandchildren, nieces, nephews and cousins. He was preceded in death his parents, Frank and Emma; his daughter, Sandi Slama; and his brothers, Frank, Lester, Joe and Loren Jelinek. Condolences may be expressed to the family online at www.stonacekfuneralchapel.com.

The family of Duane E. Jelinek created this Life Tributes page to make it easy to share your memories.

Send flowers to the Jelinek family.