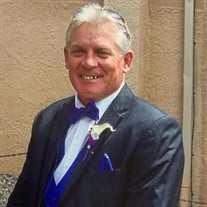 NORFOLK -- Funeral service for Earl J. "Jim" Workman, 50, of Norfolk will be held at 10:30 a.m., Tuesday, February 23, 2021 at Stonacek Funeral Chapel in Norfolk with Rev. Terry Buol officiating the service. Private family inurnment will take place at a later date. Visitation will be held from 5:00 - 7:00 p.m., Monday, also at Stonacek Funeral Chapel. Jim passed away Thursday, February 18, 2021 at the Faith Regional Hospital in Norfolk. Stonacek Funeral Chapel in Norfolk is in charge of the arrangements. Jim was born on June 4, 1970 in Steubenville, OH; to Earl and Brenda (Thrasher) Workman. Jim attended school in Shenandoah, IA. After high school and moving to Nebraska Jim was eager to start working as a brick layer. He then fell in love and started his happy life with the woman of his dreams, Shelly Pittack. Jim and Shelly got married on June 26, 2004 in Norfolk. After married the couple moved to Tekamah, NE in 2006 where Jim was a traveling welder. They grew a life together and made so many friends and memories. Jim used this time in Tekamah to teach his kids right from wrong. If there’s one thing Jim talked about it was how proud he was of his sons. In 2014 the family moved to Norfolk, where Jim started driving semi and then managed the Norfolk mobile home trailer park. Jim enjoyed many things in life, such as throwing horse shoes, spending time with his sons and grand babies, being with his dog (he loved that fat road dog more than anything), tap dancing, and most of all loved his family. Jim battled a lot of demons in his life, although he always overcame them. Jim had a loving heart and for those that knew Jim would say he loved with his whole heart and nothing less. Jim was a mommy’s boy and wouldn’t change that for the world. Jim did leave behind a message for his family he wanted you to hear. “Life got crazy, the past is the past. Now I’m gone and your still here; so love strong and forgive easier. God bless you all. Wipe the tears and celebrate my life.” Survivors include spouse Shelly Workman of Norfolk, children Lindsay Ward of Lincoln, Katie Dorhen of Hartington, Cody Workman of Oakland, Jordan Workman of Wisner, Hunter Gronethal of Scribner, 8 grandchildren, mother Brenda (Robert) Schmidt of Norfolk, sister Dixie Board of Norfolk, brother Dave Board of Louisiana, and sister Lisa Board of Norfolk. Jim was preceded in death by his father Earl Workman, second mother Lois Ries, uncle Ronald Thrasher, and maternal grandparents. Casket bearers will be David Board, Sean Board, Davey Board, Jeff Ronnfeldt, Dalton Jenkins, Adam Middlestadt, Ramsey Pratt, and Bob McDonald. Condolences may be expressed to the family online at www.stonacekfuneralchapel.com.

The family of Earl "Jim" J. Workman created this Life Tributes page to make it easy to share your memories.

Send flowers to the Workman family.