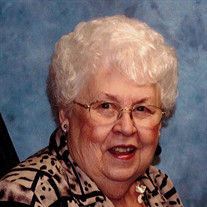 OSMOND - Funeral services for Elaine J. Peterson, age 85 of Osmond will be 10:30 a.m., Saturday, April 2, 2022 at Immanuel Lutheran Church in Osmond. Officiating the service will be Reverend Scott Kirchoff. Visitation for Elaine will be from 9:00 a.m., Saturday to service time at Immanuel Lutheran Church in Osmond. Interment will be at Immanuel Lutheran Cemetery, rural Osmond, NE. Elaine died Sunday, March 27, 2022 at Avera Hospital, Yankton, S.D., Elaine Peterson was born July 3, 1936, in Curtis to John and Edith (Rath) Turner. She was baptized on April 11, 1937, and confirmed at St. John’s Lutheran Church in Curtis. She graduated from the University of Nebraska School of Agriculture in 1956. She married Wendell Peterson on March 8, 1956, at Curtis. The couple spent time in Norman, Okla., Millington, Tenn., and Norfolk, Va., while in the military. They returned to Curtis to farm until 2007. In 2007, they moved to Osmond. They enjoyed wintering in Bullhead City, Ariz., for many years. Elaine was a member of Immanuel Lutheran Church in Osmond, L.W.M.L. Elaine took pride in her garden, sewing crafts. Elaine always sent cards to everyone that was important to her. Her life was dedicated to her family in every way. Elaine loved spending time with her family and friends, it was a complete joy to her. Elaine was a true servant to her Lord. She was loved by all who met her, especially her four children, Terry, Randy, Tina and Darren. She is survived by her spouse, Wendell Peterson; children Terry (Sandy) Peterson, Randy (Kelly) Peterson, Tina (Steve) Kumm and Darren (Danielle) Peterson; 10 grandchildren; 12 great-grandchildren; brothers Richard (Ruth) Turner, David Turner and Dale (Carrie) Turner; sisters Connie (Terry) Kamparth and Ellen (Gary) Kuenning; brothers-in-law Ronald (Sharon) Peterson and Wayne Peterson; and many nieces and nephews. She was preceded in death by her parents, John and Edith Turner; infant sister Alyce Mae Turner; brother Charles Turner; and sister-in-law Marlene Morthole, father and mother in-law Edwin and Elsie Peterson. Organist for the services will be Lori Koehler with congregational hymns “I’m But A Stranger Here,” “The Lamb” and “Great Is Thy Faithfullness.” Condolences may be expressed to the family online at www.stonacekfuneralchapel.com.

OSMOND - Funeral services for Elaine J. Peterson, age 85 of Osmond will be 10:30 a.m., Saturday, April 2, 2022 at Immanuel Lutheran Church in Osmond. Officiating the service will be Reverend Scott Kirchoff. Visitation for Elaine will be from... View Obituary & Service Information

The family of Elaine J. Peterson created this Life Tributes page to make it easy to share your memories.

Send flowers to the Peterson family.