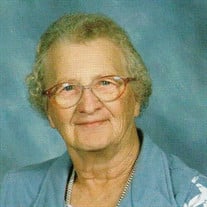 PIERCE - Funeral service for Elaine M. Schwarting, 88, of Pierce will be held at 10:30 a.m., Saturday, February 1, 2020 at the Stonacek Funeral Chapel in Norfolk with Rev. Gordon Bruce and Vicar Ryan Mazer officiating. Interment will be held at the Hillcrest Memorial Park Cemetery, Norfolk. Visitation will be 9:00 a.m. until service time also on Saturday at the Stonacek Funeral Chapel in Norfolk. Elaine died Monday, January 27, 2020 at the Copper Leaf Nursing Home in Schofield, WI. Stonacek Memorial Chapel in Pierce is in charge of the arrangements. Elaine M. Schwarting, daughter of Henry and Emma (Carstens) Warneke, was born May 11, 1931, in Pierce. She was baptized on May 11, 1931, and confirmed on April 2, 1954, both at St. John’s Lutheran Church in rural Pierce. She attended Pierce Public Schools, School District 28 at Randolph and School District 64 at Pierce for eighth grade. She married Clifford Schwarting on April 4, 1954, at Zion Lutheran Church in Pierce. The couple farmed in the Meadow Grove area. The family moved northeast of Pierce in September 1965 and moved in October 1980 to Pierce. Elaine cleaned at Alegent Health in Pierce for 15 years and was a cook at Faith Regional Health Services in Norfolk. Elaine enjoyed gardening, flowers and collected salt and pepper shakers over the years. Elaine moved in 2016 to Edgar, Wis., to be by her son, Delbert. She was a member of Zion Lutheran Church in Pierce and its ladies aid. Survivors include her sons, Vernon Schwarting of Pierce and Delbert Schwarting and spouse Michelle of Edgar, Wis., four grandchildren and two great-grandchildren. She was preceded in death by her parents, Henry and Emma; a granddaughter, Crystal Schwarting; a brother, Harry; her spouse, Clifford, who passed away Jan. 3, 2008; her sisters, Linda Zellmer and Esther Roberts; and her half brother and sisters, Hugo Warneke, Ella Liedman, Ruth Warneke and Erna Warneke. Casket bearers will be Jason Schwarting, Justin Schwarting, Paul Warneke, Donald Liedman, Tim Lienemann and Dave Lienemann.

PIERCE - Funeral service for Elaine M. Schwarting, 88, of Pierce will be held at 10:30 a.m., Saturday, February 1, 2020 at the Stonacek Funeral Chapel in Norfolk with Rev. Gordon Bruce and Vicar Ryan Mazer officiating. Interment will be held... View Obituary & Service Information

The family of Elaine M. Schwarting created this Life Tributes page to make it easy to share your memories.

Send flowers to the Schwarting family.