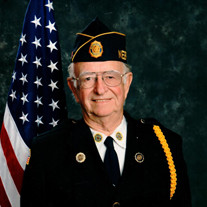 NORFOLK -- Funeral service for Eldon H. Meyer, 87, of Norfolk will be held at 11:00 a.m., Thursday, September 24, 2020 at the Christ Lutheran Church in Norfolk with Rev. David Goehmann officiating. Interment will be held at the New Lutheran Cemetery, Norfolk. Visitation will begin at 9:00 a.m. until service time on Thursday also at the church. Military rites will be conducted by the American Legion Post #16, V.F.W. #1644, both of Norfolk, Nebraska American Legion Riders, and the United States Army Honors Guard Eldon passed away Monday, September 21, 2020 at the Faith Regional Hospital in Norfolk. Stonacek Funeral Chapel in Norfolk is in charge of the arrangements. Eldon H. Meyer was born Dec. 26, 1932, on the family farm in rural Howells to Harry and Sophie (Goeller) Meyer. He was confirmed at St. Peter’s Lutheran Church in Humphrey and graduated from Creston High School in 1950. Eldon served in the U.S. Army from June 22, 1953, to April 26, 1955, where he worked as a Morse code operator for the commander of the 41st Combat Engineer battalion. After the service, he then farmed for 15 years in the Cornlea, Creston and Leigh area. He worked as a welder for Irrigation Pump Co. and Behlens in Columbus. He also worked as a sheet metal mechanic at Kenning and Reil, Murray’s and Volkman Plumbing and Heating in Norfolk, later retiring in 1990. Eldon enjoyed watching K.C. Royals baseball, Cornhusker football, horse races, as well as fishing in South Dakota. He was a member of Christ Lutheran Church in Norfolk, American Legion Post 16 and America Veterans Post 17. Survivors include his daughters, Cindy (Frank) Vance of Omaha and Cheryl Ippolito of Las Vegas; a son, Russell Meyer of Las Vegas; three grandchildren, Nicholas Ippolito, Casey Vance and Kelly Vance; a great-grandson, Inti Tume Vance; two brothers, Lyle (Evelyn) Meyer of San Diego, Calif., and Douglas (Sandra) Meyer of St. Peters, Mo.; a sister, Marilyn Bender of Poncho Springs, Colo.; and a sister-in-law, June Meyer of Madison. He was preceded in death by his parents, Harry and Sophie, and a brother, Gordon Organist for the funeral will be Tetsuya Sugita. Casket bearers will be Dan Bender, James Meyer, David Meyer and Nicholas Ippolito. Condolences may be expressed to the family online at www.stonacekfuneralchapel.com.

NORFOLK -- Funeral service for Eldon H. Meyer, 87, of Norfolk will be held at 11:00 a.m., Thursday, September 24, 2020 at the Christ Lutheran Church in Norfolk with Rev. David Goehmann officiating. Interment will be held at the New Lutheran... View Obituary & Service Information

The family of Eldon H. Meyer created this Life Tributes page to make it easy to share your memories.

Send flowers to the Meyer family.