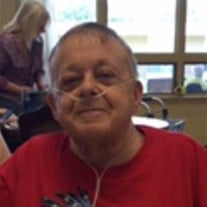 NORFOLK — Services for Eldon Zoubek, 76, Norfolk, will be at 11 a.m. Thursday, May 23, at Stonacek Funeral Chapel in Norfolk. The Rev. Lee Weander will officiate. Private burial will be at a later date. Visitation will begin at 9 a.m. Thursday and continue until services at the funeral chapel. He died Monday, May 20, 2019, at St. Joseph’s Rehabilitation and Care Center in Norfolk. Born June 10, 1942, in Columbus, Eldon was the son of Emil and Lillie J. (Viktorian) Zoubek. He grew up on the family farm by Clarkson and attended country school. At the age of 16, he went to the Beatrice State Developmental School. He came to Norfolk when it was Region IV from Beatrice and lived with the Mel Tappe family for over 20 years, moving with them to Lincoln. Eldon worked at Goodwill Industries and a Lincoln hotel. Eldon moved back to Norfolk and was part of NorthStar. He had his own Norfolk Shopper route; some of his more current jobs were working at Kelly’s Country Club, Knights of Columbus and the Norfolk Veterans Home. Eldon enjoyed gardening, the “J. Club” at NorthStar, going to Camp Luther and staying active and helping at NorthStar. He also liked John Deere tractors, coloring pictures for everyone and the color blue. Eldon lived with the Darla Hintz family for 16 years and was a part of their life. He has been a resident of St. Joseph’s Nursing home the last two years. Survivors are his close friends, Vonnie (Wilfred) Henry of Piedmont, S.D., Darla Hintz of Norfolk, Wendy (Kevin) Signor of Norfolk, and siblings Janet Kroft and Carolyn Messing. He was preceded in death by his parents, Emil and Lillie Zoubek; his brothers, Lumir and Richard; and a sister, Doris Stracke. Recorded hymns include “Jesus Loves Me” and “In The Garden.” Casketbearers will be Kevin Signor, Wilfred Henry, Evan Lamson, Gary Whitman, Jeremy Bornholdt and Pat Sullivan. Condolences may be expressed to the family online at www.stonacekfuneralchapel.com.

NORFOLK &#8212; Services for Eldon Zoubek, 76, Norfolk, will be at 11 a.m. Thursday, May 23, at Stonacek Funeral Chapel in Norfolk. The Rev. Lee Weander will officiate. Private burial will be at a later date. Visitation will begin at 9 a.m.... View Obituary & Service Information

The family of Eldon Zoubek created this Life Tributes page to make it easy to share your memories.

Send flowers to the Zoubek family.