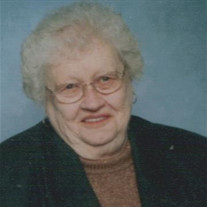 PIERCE — Services for Eldora G. Schafer, 95, Plainview, will be at 10:30 a.m. Thursday, Sept. 19, at the United Methodist Church in Pierce. The Rev. Rodgers Chishiba will officiate. Burial will be in the Randolph City Cemetery. Visitation will be 4-7 p.m. Wednesday at Stonacek Memorial Chapel in Pierce. She died Sunday, Sept. 15, 2019, at Plainview Manor. Eldora G. Schafer, daughter of Emil and Mae Bertha (Jordan) Nelson, was born July 21, 1924, in Eden Valley in rural Plainview. She attended Eden Valley School in rural Plainview. At the age of 18, Eldora met the love of her life, Henry E. Schafer of Sholes. After the couple were married on Aug. 29, 1942, at Pierce, they farmed northeast of Pierce and then moved to a farm southwest of Osmond until 1967 when they moved to Foster. From this union, three children were born: Henry L. Schafer Jr., Robert D. Schafer and Judy (Schafer) Woslager. Eldora enjoyed cooking, embroidery, sewing many towel sets, pillowcases and socializing. She did babysitting for the neighbor kids and the Robinsons, who became like family. Eldora worked at the Plainview Hospital in the cleaning department and then worked at Plainview Manor and Pierce Manor as a dietitian for many years. She worked part time at the Hot Spot Bar in Foster. Eldora enjoyed going places with her dear friend, Delores Robinson. She was a member of United Methodist Church in Pierce. Survivors include a son, Roy Schafer and dear friend, Sharon of Pierce; a daughter, Judy (Ray) Woslager of Pierce; a daughter-in-law, Bonnie Schafer of Pierce; eight grandchildren; 15 great-grandchildren; seven step great-grandchildren and four great-great-grandchildren. She was preceded in death by her parents, Emil and Mae; her spouse, Henry; a sister, Jean McGee; two brothers, Edward and Melvin Nelson; a son, Robert; a daughter-in-law, Carol; and a great-great-granddaughter, Keely Settles. Pianist will be Shirley Hetrick playing congregational hymns “Amazing Grace,” “On Eagle’s Wings,” “I’ve Got Peace Like A River” and “It Is Well With My Soul.” Casket bearers will be Richard Schafer, Robert Schafer, Dave Hasebroock, Brenton Peters, Brent Goetsch and Dave Robinson. Honorary casket bearers will be her grandchildren and great-grandchildren. Online condolences may be sent to www.stonacekfuneralchapel.com.

PIERCE &#8212; Services for Eldora G. Schafer, 95, Plainview, will be at 10:30 a.m. Thursday, Sept. 19, at the United Methodist Church in Pierce. The Rev. Rodgers Chishiba will officiate. Burial will be in the Randolph City Cemetery. Visitation... View Obituary & Service Information

The family of Eldora G. Schafer created this Life Tributes page to make it easy to share your memories.

Send flowers to the Schafer family.