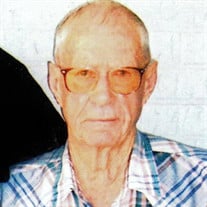 NORFOLK -- Graveside service for Elmer R. "Spec" Retzlaff, 97, of Norfolk, will be held at 10:30 a.m., Monday, April 27, 2020 at the St. Paul's Lutheran Cemetery in Norfolk with Rev. Austin Ziche officiating. Limited visitation will be held 2:00-5:00 p.m., Sunday, at the Stonacek Funeral Chapel in Norfolk. In compliance with COVID-19 restrictions there will be a strict enforcement of 10 people allowed inside the facility at one time and they may need to wait outside. Military rites will be conducted by the Tomek-Otto Post 72 American Legion of Pierce and the United States Army Honors Guard. Spec passed away on Wednesday, April 22, 2020 at the Norfolk Veterans Home. Stonacek Funeral Chapel in Norfolk is in charge of the arrangements. Elmer “Spec” was born January 1, 1923, rural Hadar to William and Elenore (Dederman) Retzlaff. Spec was baptized on January 28, 1923 at the Immanuel Lutheran Church in Hadar. He attended grade school in Hadar until the 8th grade, and he was confirmed at Immanuel Lutheran Church in Hadar on May 16, 1937. On January 19, 1945 Spec joined the United States Army and served in World War II until his honorable discharge on December 1, 1946. After serving in the military Elmer moved back to Hadar where he worked construction for Theisen’s. On September 5, 1973, Elmer married Jeanette Magnussen at the Immanuel Lutheran Church in Hadar. He had a great love for baseball; he was an avid fan and played baseball and softball for many years. Elmer was the youngest of six brothers and sisters whom have all passed. Survivors include his step-children Roger (Carol) Magnussen of York, Rodney (Connie) Magnussen of Norfolk, Cindy (Gordon) Johnston of Key West, Florida, step daughter-in-law Kathy (George) Witte of North Platte, 11 step-grandchildren, sisters in law Lois Retzlaff and Diane Kahler, several great grandchildren, nieces and nephews. He was preceded in death by his is wife Jeanette in 2002, step son Randall Charles Magnussen, his parents, siblings Irene (Kenneth) Stephens, Verona (Augie) Kuhl, LeRoy (Ethel) Retzlaff, Bernice (Ronnie) Moss, and Harry (Sophia) Retzlaff. Casket bearers will be Elmer’s grandchildren. The family requests that memorials be made to the family for a later designation to be made in Spec’s name. Condolences may be expressed to the family on-line at www.stonacekfuneralchapel.com.

The family of Elmer R. "Spec" Retzlaff created this Life Tributes page to make it easy to share your memories.

Send flowers to the Retzlaff family.