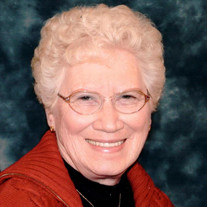 NORFOLK -- Funeral service for Emily A. Kieckhafer, 82, of Norfolk will be held at 10:30 a.m., Tuesday, February 18, 2020 at the St. Paul's Lutheran Church in Norfolk with Rev. Paul Hirsch officiating. Interment will be at St. Paul's Lutheran Cemetery, Norfolk. Visitation will be 4:00-7:00 p.m., Monday, also at St. Paul's Lutheran Church. Emily died Thursday, February 13, 2020, at St. Joseph's Rehabilitation and Care Center in Norfolk. Stonacek Funeral Chapel in Norfolk is in charge of the arrangements. She was born July 15, 1937, to Emil and Annie (Crabtree) Reed at Wausa. She graduated from Osmond High School in 1955. She was baptized on Oct. 4, 1944, in Wausa, and confirmed on May 31, 1953, in Wausa. She married Dwain Kieckhafer on July 11, 1989, in Yankton, S.D. She was a member of St. Paul’s Lutheran Church, Norfolk. After high school, Emily worked as a secretary at the White House in Washington, D.C. She then moved to Milwaukee and attended school for engineering. She received her license on Sept. 26, 1961. She had four children and they moved to Osmond. While in Osmond, Emily worked as a nurse’s aide at various places. She then moved to Pender, where she had her five child before moving to Norfolk, where she met Dwain. Emily enjoyed playing cards, gambling and playing games with her family. Survivors include her spouse Dwain Kieckhafer of Norfolk; son Joe Zarello of Norfolk, two daughters Patty Davidson of Norfolk, Gerri Anderson of Norfolk; nine grandchildren Troy, Merisa, Patience, Parker, Tabitha, Ryder, Cammie, Jennifer and Derek; many great-grandchildren, siblings Pauline (Robert) Dilliplain of Osmond, Darlene Hoffman of Texas, numerous nieces and nephews, three step-children Deb, Diane and Donna, and one pet Trixie. She was preceded in death by her parents Emil and Annie; two children JoAnn Zarello and David Zarello, and six siblings. For the service, Alicia Moyer will be organist. Casket bearers will be Joe Zarello, Shad Buchanan, Dayne Reed, Daryl Thomjack, Allan Reed, Todd Anderson and Ryan Buchanan. Condolences may be expressed to the family on-line at www.stonacekfuneralchapel.com.

NORFOLK -- Funeral service for Emily A. Kieckhafer, 82, of Norfolk will be held at 10:30 a.m., Tuesday, February 18, 2020 at the St. Paul's Lutheran Church in Norfolk with Rev. Paul Hirsch officiating. Interment will be at St. Paul's Lutheran... View Obituary & Service Information

The family of Emily A. Kieckhafer created this Life Tributes page to make it easy to share your memories.

NORFOLK -- Funeral service for Emily A. Kieckhafer, 82, of Norfolk...

Send flowers to the Kieckhafer family.