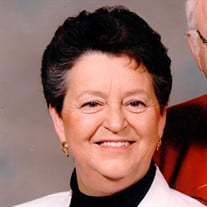 STANTON -- Funeral service for Eva D. Heckens, 77, of Stanton will be held at 10:30 a.m. Monday, December 7, 2020 at Stonacek Funeral Chapel in Norfolk with Rev. Bridget Gately officiating the service. The funeral service will be live-streamed on the Stonacek Funeral Chapel Facebook page. Interment will take place at the Stanton City Cemetery, rural Stanton. Visitation will be held from 2:00 - 5:00 p.m., Sunday, at Stonacek Funeral Chapel in Norfolk. Face Masks are required for the visitation and funeral. Eva passed away Tuesday, December 1, 2020 at her home in Stanton with family by her side. Stonacek Funeral Chapel in Norfolk is in charge of the arrangements. The funeral service will be live streamed on the Stonacek Funeral Chapel Facebook page. Born Oct. 18, 1943, in Arthur, Iowa, Eva D. Heckens was the daughter of Charles Elmer and Ida Marqurite (Sumpter) Heldt. Eva grew up in Battle Creek, Iowa, where she attended grade school and graduated from Battle Creek High School in Iowa in 1961. She then attended and graduated from Wayne State College with a bachelor’s degree in education in 1972. She married Dallas Heckens on Oct. 5, 1963, at Presbyterian Church in Battle Creek, Iowa. She lived in Wakefield, Wayne, Wisner and then moved to Stanton in 1978. She taught at District 14 for five years, District 36 from 1983 to 1995, and Pierce from 1995 to 2008 until she retired. Eva enjoyed golfing, reading, teaching, and playing bass guitar in a local band. She was a member of Nebraska State Education Association and a National Education Association, an NRA member, MOMS member, church choir and director, Pierce Education Society and member of the United Methodist Church in Stanton. Survivors include her spouse, Dallas Heckens of Stanton; her children, April Heckens of Stanton, Dallas Jr. (Tabitha) Heckens of Vermillion, S.D., DeAnn Heckens (dear friend Tony Kander) of Stanton; 13 grandchildren; four great-grandchildren; two sisters, Alice (Carl) Carlson of Sioux Falls, S.D., and Joe Heldt of Sioux Falls. She was preceded in death by a son, Troy Heckens; her parents, Charles and Ida; a brother, David Heldt; and three sisters, Phyllis Clark, Ruth Hesse and Joan Spotts. Pianist for the funeral will be Dorothy Fuller. Casketbearers will be Patrick Cunningham, Mike Thomas, Brett Heckens, Scott Heckens, Brandon Boldt and Jerry Clark. Condolences may be expressed to the family online at www.stonacekfuneralchapel.com.

STANTON -- Funeral service for Eva D. Heckens, 77, of Stanton will be held at 10:30 a.m. Monday, December 7, 2020 at Stonacek Funeral Chapel in Norfolk with Rev. Bridget Gately officiating the service. The funeral service will be live-streamed... View Obituary & Service Information

The family of Eva D. Heckens created this Life Tributes page to make it easy to share your memories.

Send flowers to the Heckens family.