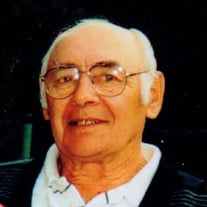 STANTON -- Funeral service for Everett A. Schuetz, 89, of rural Stanton will be held at 10:30 a.m., Monday, February 10, 2020 at the Community Bible Church in Norfolk with Rev. Arin Hess officiating. Interment will be at the Bega Cemetery, rural Stanton county. Visitation will be held 2:00-4:00 p.m., Sunday, February 9, at the Stonacek Funeral Chapel in Norfolk. Military rites will be provided by the V.F.W. Post #3602 and the American Legion Post #88 both of Stanton, and the United States Army Honors Guard. Everett died Wednesday, February 5, 2020 at the Norfolk Veterans Home. Stonacek Funeral Chapel is in charge of the arrangements. Everett Schuetz was born Dec. 28, 1930, in rural Carroll to Herman and Louisa (Loehnig) Schuetz. He attended country school at District #31, rural Wayne, and graduated from Winside High School in 1948. He then took some agricultural classes through the G.I. Bill in Norfolk He married Gisela Linge on March 5, 1955, at Theophilus Evangelical Church near Winside. After high school, Everett worked construction for one year before being drafted into the United States Army. He served from March 3, 1952, to Feb. 22, 1954. He was deployed to Germany as part of the Army of Occupation and worked as a radio code operator and teacher. After the service Everett worked construction in Wayne for one year. After Everett and Gisela were married on March 5, 1955, they remained in the Winside area while he worked as a hired man. They then moved to a farm near Norfolk where he farmed and worked in the State Hospital Dairy. In 1958, they purchased a farm north of Stanton where they lived and farmed until 2017. Everett also worked at the Norfolk Post Office from 1983 to 1992. Everett and Gisela became members at the Norfolk Veterans Home in 2017. He enjoyed farming, pheasant hunting, playing horse shoes, taking family vacations, and visiting family. He was a member of the Community Bible Church, Norfolk. Survivors include his wife, Gisela Schuetz of Norfolk; children Matthias (Marci) Schuetz of Stanton, Maria (Pastor John) Kenney of Hugelfing, Germany, Heidi Schuetz of Lincoln; four grandchildren; nine great-grandchildren; siblings Doris Bohl of Loveland, Colo., Virgil Schuetz of Loveland, George Schuetz of Middletown, Mo., Howard (Julie) Schuetz of Stanton, Larry (Kathy) Schuetz of Berthoud, Colo., and Lyle (Carol) Schuetz of Denver, Colo. He was preceded in death by his parents, Herman and Louisa. Pianist for the service will Mrs. Anne Marie Hess. The congregational hymns will be “Christ We Do All Adore Thee” and “If Thou But Suffer God To Guide Thee.” His grandchildren will sing “It Is Well With My Soul.” Pallbearers will be Aaron Schuetz, Brad Brooks, Tristan Kenney, Aaron Mathis, Alan Schuetz and Gregg Schuetz. Honorary pallbearers (Everett’s siblings) will be Virgil Schuetz, George Schuetz, Howard Schuetz, Larry Schuetz, Lyle Schuetz and Doris Bohl. The family requests that memorials be made to the Parkinson’s Foundation, 200 SE First St., Suite 800, Miami, FL 33131. Condolences may be expressed to the family online at www.stonacekfuneralchapel.com.

STANTON -- Funeral service for Everett A. Schuetz, 89, of rural Stanton will be held at 10:30 a.m., Monday, February 10, 2020 at the Community Bible Church in Norfolk with Rev. Arin Hess officiating. Interment will be at the Bega Cemetery, rural... View Obituary & Service Information

The family of Everett A. Schuetz created this Life Tributes page to make it easy to share your memories.

Send flowers to the Schuetz family.