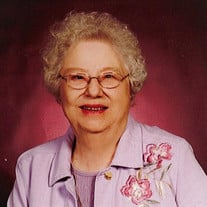 NORFOLK -- Funeral service for Fern L. Hetrick, 96, of Norfolk will be held at 11:00 a.m., Monday, November 15, 2021 at the First United Methodist Church in Norfolk. Rev. Neil Gately will be officiating the service. Interment will be at the Tilden City Cemetery, Tilden. Visitation will be 2:00-4:00 p.m., Sunday, at the Stonacek Funeral Chapel in Norfolk. Fern passed away on Tuesday, November 9, 2021 at the Faith Regional Hospital in Norfolk. Stonacek Funeral Chapel is in charge of the arrangements. Fern LaVone Hetrick was born July 9, 1925, in Tilden to William and Maude (Hanks) Jones, weighing just 2.5 pounds. She was baptized and confirmed at the United Methodist Church in Tilden and graduated from Tilden High School in 1943. After high school, Fern moved to Norfolk in 1944 and attended Norfolk Business College. Fern married Norris Hetrick on March 21, 1948, at the United Methodist Church in Tilden. He passed away in 1987. After marriage, Fern and Norris moved to Norfolk where Norris worked as a contractor building homes in Norfolk. Fern worked at Wetzel & Truex Jewelers in Norfolk and then for attorneys Jack Koenigstein and George Dittrick in Norfolk. She did volunteer work at the hospital and was a Sunday school teacher. She also worked as an aide at the hospital. She enjoyed traveling, playing cards, bingo, women’s club, extension club, bridge club and her cats. She loved to spend time with her family and friends, especially her grandson. She will be remembered as a kind and generous person to all that knew her. Fern was a member of the First United Methodist Church, Norfolk, United Methodist Women, Fun Club, Elkhorn Valley Extension Club, Bird Club, Bridge Club and Norfolk Woman’s Club. Survivors include her daughter, Tamara (David) Clawson of Norfolk; grandson Jason; sister-in-law Shirley Hetrick of Pierce; and cousin Joan Hall of Norfolk. She was preceded in death by husband Norris; parents William and Maude; granddaughter Shannon, brother Lloyd Jones, brother-in-law Eldon "Bud" Hetrick and sister-in-law Arlene Miller. Organist for the service will be Linda Boullion. Casketbearers will be Randy Hetrick, Al Hetrick, Mark Luebe and Todd Boche. Condolences may be expressed to the family online at www.stonacekfuneralchapel.com.

NORFOLK -- Funeral service for Fern L. Hetrick, 96, of Norfolk will be held at 11:00 a.m., Monday, November 15, 2021 at the First United Methodist Church in Norfolk. Rev. Neil Gately will be officiating the service. Interment will be at the... View Obituary & Service Information

The family of Fern L. Hetrick created this Life Tributes page to make it easy to share your memories.

Send flowers to the Hetrick family.