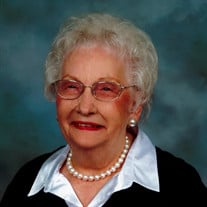 NORFOLK – Funeral service for Frances “Jane” Witt, 99, of Norfolk formerly of Winside, will be held at 10:30 a.m., Friday, February 4, 2022 at the Our Savior Lutheran Church in Norfolk with Pastor Lee Weander officiating. Interment will be held at the Pleasant View Cemetery, rural Winside. Visitation will begin one hour prior to the service on Friday also at the church. Jane passed away Sunday, January 30, 2022 at the St. Joseph’s Care Center in Norfolk. The family asks that memorials be made to Lutheran High Northeast, 2010 N 37th St, Norfolk, NE 68701. The service will be live-streamed at https://vimeo.com/672134970. Stonacek Funeral Chapel is in charge of the arrangements. Frances “Jane” Witt was born on January 4, 1923 in Norfolk, Nebraska to August H. and Greta B. (Boeck) Kell. She was baptized and confirmed at Grace Lutheran Church, Norfolk. She was raised in Norfolk and graduated from Norfolk Senior High School in 1941. She then attended Lindenwood College in St. Charles, MO. She married Clarence “C.O.” Witt on February 16, 1947 at Grace Lutheran Church in Norfolk. Jane and C.O. moved to Winside in 1948 where they raised their 3 children. Together they owned and operated Witt’s Cafe for 40 years. They retired to Norfolk after selling the café in 1989. Jane was employed in the business office at Northwestern Bell Telephone Company retiring in 1985. Jane was an avid bridge player belonging to numerous bridge clubs “Oh the thrill of a Grand Slam or seven no trump!” She was a member of Our Savior Lutheran Church, Norfolk, Our Savior LWML (serving as President and Treasurer), American Legion Auxiliary since 1936, VFW Auxiliary, and was a Gold Star Mother since 1969. She volunteered at Faith Regional Health Services (serving as Treasurer for several years). She enjoyed vegetable gardening and had exceptional baking and cooking skills. Jane’s kitchen was her domain, and her greatest joy was serving and sharing the bounty of her kitchen with her family and friends. There was always room for one more at her table. Jane is survived by her son David (Lee Ann) Witt of Scottsdale, Arizona, daughter Jane (Jim) Amen of Lincoln, 5 granddaughters, and 7 great grandchildren. She was preceded in death by her parents August and Greta Kell, son Mark Witt (killed in Vietnam), and husband Clarence “C.O.” Witt. Condolences may be expressed to the family on-line at www.stonacekfuneralchapel.com.

The family of Frances J. "Jane" Witt created this Life Tributes page to make it easy to share your memories.

Send flowers to the Witt family.