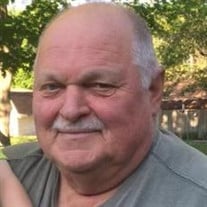 NORFOLK -- Memorial service for Francis R. Leathers, 76, of Norfolk will be held at 1:30 p.m., Wednesday, August 11, 2021 at Stonacek Funeral Chapel in Norfolk. Officiating the service will be Rev. Terry Buol. Private family inurnment will take place at a later date. Military rites will be conducted by the American Legion Post #16, V.F.W. Post #1644, American Legion Riders, and the United States Army Honors Guard. Francis died on Friday, August 6, 2021 at Faith Regional Health Services in Norfolk. Francis was born on July 3, 1945, at home near Neligh to Colette (Hoffmann) Dederman and Harold Leathers. Francis later became the step-son of Dillard Dederman. He grew up in Pierce. He attended school in Pierce before leaving in High School to help on the family farm. He served in the U.S. Army and Vietnam. After his discharge, he moved to the Norfolk area. He worked at Battle Creek CO-OP before beginning his career with Vulcraft. His adventurous lifestyle led him to work in Jackson Hole Wyoming for several years where he continued his love for the outdoors before returning to Norfolk and retiring from Vulcraft. He married Margaret (Luebe). To this union sons Tom and Tim were born. He later married Patricia (Marquardt) Washburn. To this union daughter Tonja was born. He enjoyed being an outdoorsman, was a jack of all trades, loved attending auctions, and telling one of his many exciting hunting stories. Of all of his wild adventures in life, his most precious was time spent with family. Survivors include his son, Tom (Maureen) Leathers of Meadow Grove and their daughters, Emily (Danny), Andrea, and Alyssa (Colin); son Tim (significant other, Emily) Leathers of Tilden and his daughters Justine (Andy) and Taylor (fiancé, Mike); and his daughter Tonja (Aaron) Taylor of Plattsmouth and their children Tyler (Anna), Leah (Eric), Dillon, Caitlin (Emmit) and Emma. Francis was also blessed with 14 great-grand children. Surviving siblings are John (Gayle) Leathers of Iowa, Vicki (Jim) Anderson of Missouri, Dean (Kristi) Dederman of Norfolk; sister-in-law Sharon Leathers of Illinois, brother Ted (Gayla) Leathers of Omaha and sister Leslie Fox of Omaha. He is also survived by an uncle, many cousins, nieces and nephews. He was preceded in death by his parents, his first wife Margaret and his brother, James Leathers. Memorials can be sent to Tom & Maureen Leathers, 54024 840 Rd, Meadow Grove , NE 68752. Dad’s wishes were that everyone dress casual for the service. Condolences may be expressed to the family on-line at www.stonacekfuneralchapel.com.

The family of Francis R. Leathers created this Life Tributes page to make it easy to share your memories.

Send flowers to the Leathers family.