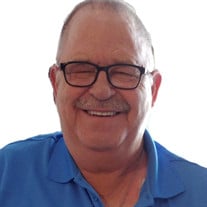 NORFOLK -- Funeral service for Francis D. "Frank" Ruppert, 69, of Norfolk, will be held at 10:30 a.m., Wednesday, October 16, 2019 at the Stonacek Funeral Chapel in Norfolk with Pastor Gabe Cotton officiating (Franks brother-in-law.) Interment will be held at the Prospect Hill Cemetery, Norfolk. Visitation will be held 4:00-7:00 p.m., Tuesday, also at Stonacek Funeral Chapel. Military rites will be conducted by the American Legion Post #16, V.F.W. Post #1644, both of Norfolk, Nebraska American Legion Riders, and the United States Army Honors Guard. Frank died peacefully in his home surrounded by his family on Saturday, October 12, 2019. Stonacek Funeral Chapel is in charge of the arrangements. Frank was born on March 30, 1950 in Norfolk, NE to Matt and Agnes (Jazwieck) Ruppert. He graduated from Madison High school in 1969. He enlisted in the United States Army in August 1969, as a Food Service Specialist (94B). He is a veteran of the Vietnam War and was awarded a bronze star. He was medically discharged with full retirement after 20 years of service to his country. SFC Ruppert was a brave and loyal soldier as well as a loving husband and father. He met Cindy Cotton in Fort Belvoir, Virginia at the NCO Club when he asked her to dance. They soon married on March 11, 1972 in Virginia and welcomed 3 children, Jason Matthew in 1973, Janel Danette in 1975, and Julie Michelle in 1977. The family travelled to Stuttgart, Germany, Colorado Springs, Colorado, Ohahu, Hawaii, Ft. Irwin, California, and Kitzengen, Germany until returning to Nebraska after retirement in 1989. He began working for Service Master of Norfolk, where he remained for nearly 20 years, until retiring as full-time Grandpa. Of all the things he accomplished, he was most proud of his marriage, children and grandchildren. Frank valued education and wanted opportunities for his children that he didn’t have, encouraging his family always to pursue their education. There wasn’t a project that couldn’t be (mostly) fixed when “modified” with tape. He loved to play cards, spades and pitch. He never met a pickle card, a lottery ticket, or a slot machine he didn’t like and although Frank only had 50% of his vision, he rarely lost a game of horse shoes, darts, or bowling. Frank is survived by his wife of 47 years, Cynthia “Cindy” Kay Ruppert of Norfolk, NE, his children; son Jason Ruppert and fiancée Alexandra Wikstrom of Virginia and his children Katie Ruppert, Tina Ruppert, and Dina Ruppert of Louisiana, daughter Janel Burival of Norfolk, NE and her children; Ethan Ruppert of Norfolk, Austin and Owenn Burival, sons of Rob Burival, all of Norfolk, daughter Julie and Justin Clausen and their children, Layne and Lyndon, of Minnesota. His 7 siblings; Bernard Ruppert, Leroy Ruppert, Delores Hoffman, Darlene Flesner, Theresa Herchenbach, Matt Ruppert, and James Ruppert. He is preceded in death by his parents, Matt and Agnes Ruppert. Casket bearers will be Jason Ruppert, Ethan Ruppert, Austin Burival, Justin Clausen, Mike Ruppert, and Rob Burival. Honorary casket bearers will be Owenn Burival, Layne Clausen, Lyndon Clausen and his granddaughters Katie, Tina, and Dina Ruppert. The family would like to thank AseraCare Hospice and the Carson Cancer Center for their dedicated efforts and unwavering care. In lieu of flowers, the family is requesting monetary gifts to be donated for Pancreatic Cancer Research. Condolences may be expressed to the family on-line at www.stonacekfuneralchapel.com.

The family of Francis D. "Frank" Ruppert created this Life Tributes page to make it easy to share your memories.

Send flowers to the Ruppert family.