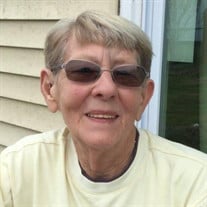 NORFOLK -- Celebration of life service for Frieda E. Ladely, 86, of Norfolk will be held at 3:00 p.m., Saturday, April 17, 2021 at the Gordon American Legion in Gordon, Nebraska. Public graveside service will begin at 2:00 p.m., Saturday, April 17 at the Gordon Cemetery, rural Gordon. Frieda passed away on Wednesday, January 6, 2021 at her residence in Norfolk . Stonacek Funeral Chapel in Norfolk is in charge of the arrangements. Frieda was born on December 21, 1934 in Hot Springs, South Dakota to Ferdinand and Marjorie (Martin) Knueppel. She attended a country district school near Oral, South Dakota and graduated from Hot Springs High School in South Dakota. She married Don Ladely on March 17, 1979 in Idaho. She was a member of the American Legion Auxiliary. Survivors include her children Sherri (Rhett) Westover of Cody, NE, Wesley (Angy) Fancher of Alliance, Ranee Goshorn of Jacksonville, N.C., 16 grandchildren, and numerous great-grandchildren and great-great-grandchildren, siblings Hal Knueppel of Tennessee, Betty McDaniel of Arizona, Carol Chaulk of Washington, Carl Knueppel of Illinois, Dorothy Vaughan of West Virginia, Linda Studdard of West Virginia, and Joyce Abramhansen of Tennessee. She was preceded in death by her spouse Don, parents Ferdinand and Marjorie, sons Fred Fancher and Gary Fancher. Condolences may be expressed to the family on-line at www.stonacekfuneralchapel.com.

The family of Frieda E. Ladely created this Life Tributes page to make it easy to share your memories.

Send flowers to the Ladely family.