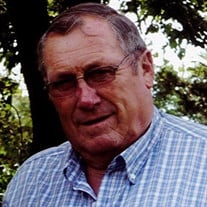 OSMOND -- Funeral service for Garry Lee Springer, 79, of Osmond will be held 10:30 a.m., Wednesday, November 24, 2021 at St. Mary's Catholic Church in Osmond. Father Tim Forget will officiate the service. Burial will take place at St. Mary's Catholic Cemetery, rural Osmond. Visitation will begin one hour prior to service time on Wednesday. Garry passed away on Saturday, November 20, 2021 at the Osmond General Hospital in Osmond. Stonacek Memorial Chapel in Osmond is in charge of the arrangements. Born Sept. 11, 1942, in Kansas City, Mo., Garry Lee Springer was the son of Harry and Louise (Kumm) Springer. He attended rural country district schools and graduated from Osmond High School in 1960. He was confirmed on May 27, 1956, at Our Savior Lutheran Church in Plainview. He married Sandra Davids on Feb. 1, 1964, at the St. Mary’s Catholic Church in Osmond. The couple lived in Osmond. Gary worked at Hoffman Construction in Plainview and later for Theisen Construction in Osmond as a heavy equipment operator. Gary bought his first truck in 1967 and partnered with Jody, his son, as S&S Express in Osmond. He enjoyed his family, reading and trucking. He was a member of St. Mary’s Catholic Church in Osmond. Survivors include his spouse, Sandra Springer of Osmond; sons Brad (Teri) Springer of Des Moines, Iowa, Jody (Shelley) Springer of Breslau; five grandchildren, Kelli Jo Springer, Bret Springer, Dustin Springer, Brianna Springer and Colin Springer; great-grandchildren Sammy Jo Springer, Elliott Springer and a future great-grandson due in May; brother and sister in-law Don (Judy) Davids of Plainview, and brother-in-law Jerry Hoffart of Plainview. He was preceded in death by his parents, Harry and Louise; in-laws Harold and Barbara Davids, and a sister-in-law, Shirley Hoffart, nephew Michael Davids, niece Lisa Christiansen Music will be provided by Corie Clausen and Dillon Bruckner. Hymn selections will be “In The Garden,” “Taste and See,” “Amazing Grace,” “The Supper Of The Lord,” “One Pair Of Hands” and “How Great Thou Art.” Casket bearers will be Garry’s grandchildren Kelli Jo Springer, Bret Springer, Dustin Springer, Brianna Springer and Colin Springer. Condolences may be expressed to the family online at www.stonacekfuneralchapel.com.

The family of Garry Lee Springer created this Life Tributes page to make it easy to share your memories.

Send flowers to the Springer family.