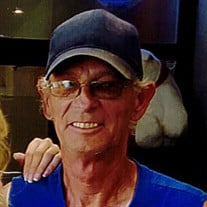 MADISON -- Memorial service for Gary Henery Johnson, 60, of Norfolk formerly of Madison, will be held at 11:00 a.m., Friday, June 25, 2021 at the Trinity United Methodist Church in Madison. Rev. Donna Goltry will be officiating the service. Private inurnment will be held at a later date. Visitation will begin one hour prior to the service on Friday also at the church. Military rites will be conducted by the American Legion Post 35, V.F.W. Post 5763, both of Madison, and the United States Army Honor Guard. The service will be live-streamed on the Stonacek Funeral Chapel Facebook page. Gary passed away on Tuesday, June 22, 2021 at his residence in Norfolk. Stonacek Funeral Chapel in Norfolk is in charge of the arrangements. Gary H. Johnson was born March 1, 1961, in Royal, the son of Lavern and Anita (Carstens) Johnson. He attended grade school in Madison and graduated from Madison High School. After serving in the U.S. Army, Gary moved to Madison. He married Rachell Blankinship on Dec. 18, 1982, at Trinity Methodist Church in Columbus. The family continued living in Madison, and he worked at Lindsay Manufacturing. Gary owned and operated his own snow removal and mowing business throughout Norfolk. They moved to Norfolk in June 2019. He enjoyed talking with people and would talk to anybody. He enjoyed collecting classic cars and antique wolves and spending time with his family. Survivors include his spouse, Rachell Johnson of Norfolk, siblings Dale Johnson and special friend Sandy Lowry of Madison, Shirley (Howard) Oberle of Norfolk, Rick (Shelby) Johnson of Creston, Bill Johnson of Norfolk, Jimmie (Sarah) Johnson of Lindsay, Tammy (Mike) Holdorf of Madison, Uncle Bob (Jackie) Carstens of Madison, Dana (Tracy) Blankinship of Fremont, Randy (Patty) Kelley of Shelby, Becky Wimeir of Grand Junction, CO., and numerous nieces and nephews. He was preceded in death by his parents, Lavern and Anita; grandparents; and mother-in-law Doris Blankinship. Organist Mary Jo Lux will provide music. Condolences may be expressed to the family online at www.stonacekfuneralchapel.com.

MADISON -- Memorial service for Gary Henery Johnson, 60, of Norfolk formerly of Madison, will be held at 11:00 a.m., Friday, June 25, 2021 at the Trinity United Methodist Church in Madison. Rev. Donna Goltry will be officiating the service.... View Obituary & Service Information

The family of Gary Henery Johnson created this Life Tributes page to make it easy to share your memories.

Send flowers to the Johnson family.