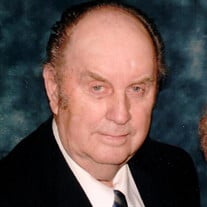 HADAR -- Funeral service for Gary O. Koeppe, 88, of Hadar will be held at 10:30 a.m., Tuesday, September 3, 2019 at the Immanuel Lutheran Church in Hadar with Rev. Austin Ziche officiating. Interment will be at the Prospect View Cemetery, Pierce. Visitation will be 4:00-7:00 p.m., Monday, at the Stonacek Funeral Chapel in Norfolk. Military rites will be provided by the Tomek-Otto Post #72 American Legion of Pierce, United States Air Force Honor Guard, and the Nebraska American Legion Riders. Gary died Thursday, August 29, 2019 at the Norfolk Veterans Home in Norfolk. Stonacek Funeral Chapel in Norfolk is in charge of the arrangements. Gary was born May 25, 1931 to Otto and Clara (Wragge) Koeppe in Pierce County, NE. He was baptized June 14, 1931 at Bethany Lutheran Church, rural Antelope County and confirmed on May 27, 1945 at Immanuel Lutheran Church, Osmond by Pastor Eric Holstine. Gary attended grade school in rural Antelope, then rural Pierce County District 19W, then attended McLean High School and Osmond High School. After high school, Gary enlisted in the United States Air Force on January 11, 1952. He was a mechanic on a B36 Bomber. Gary then married Lois Schumacher on May 20, 1953 at the Immanuel Lutheran Church, Osmond. After marriage, Gary and Lois made their home in Vallejo, California, then El Paso, Texas. Gary also spent 2 ½ years at Biggs Air Force Base. After an honorable discharge on January 10, 1956, the couple returned to Nebraska in January of that year. They farmed in the Osmond and Pierce area. In 1968 they moved to the Hadar area when Gary began working as a letter carrier for the Norfolk Post Office. Gary retired in 1992 after 29 years at the Post Office. He then worked for Rochester Armored car for 10 years. Gary loved to play cards with family and friends, family fishing trips, and watching Nebraska Cornhusker football games with his family. Gary was a member of Immanuel Lutheran Church in Hadar, where he also held numerous offices throughout his life. Survivors include children Ricky and wife Shelley Koeppe of Hadar, Bradley and wife Pamela Koeppe of Pierce, Mark and wife Lisa Koeppe of Hadar, Carla and husband Ray Winter of Norfolk; 16 grandchildren; 8 great-grandchildren with one great-grandson on the way. He was preceded in death by his spouse Lois Koeppe on March 2, 2014, his parents, brother Wesley Koeppe, a sister in infancy, great-granddaughter Kali. Organist will be Amy Bretschneider. Congregational songs will be “What A Friend We Have In Jesus” , “How Great Thou Art” , and “I Am But A Stranger Here." Casket bearers will be Adam, Chad, Chris, Brandon, Seth, Matthew, and Craig. Honorary casket Bearers will be Amy L., Stephanie, Bridget, Amy B., Cassie, Katrina, Carissa, Nevaeh, Sydney, Avery, Jaren, Zander, Alivia, Delana, Ashton, Sophia, Wesley, and one future great-grandson. Condolences may be expressed to the family on-line at www.stonacekfuneralchapel.com.

HADAR -- Funeral service for Gary O. Koeppe, 88, of Hadar will be held at 10:30 a.m., Tuesday, September 3, 2019 at the Immanuel Lutheran Church in Hadar with Rev. Austin Ziche officiating. Interment will be at the Prospect View Cemetery, Pierce.... View Obituary & Service Information

The family of Gary O. Koeppe created this Life Tributes page to make it easy to share your memories.

Send flowers to the Koeppe family.